It was another week of goals, saves, cup ties and league games for our overseas and domestic based Aussies.

Midweek the Portland Thorns lost 4-1 to the top-of-the-table North Carolina Courage. Ellie Carpenter came on as a half-time substitute.

Sam Kerr played a pivotal role in her first win with the Chicago Red Stars. She opened the scoring in wet and wild conditions. Yuki Nagasato’s free kick was parried away by Kelsey Wys; Kerr toe-poked it home.

Earlier in the week both Kyah Simon and Steph Catley were listed on the injury report with groin strains. Simon ended up playing 67 minutes in Houston’s 1-1 draw with North Carolina.

Meanwhile, Catley did not play for Seattle in their 0-0 draw with Orlando. However, Lydia Williams did and made three saves on her way to recording a third straight clean sheet for the Reign.

Wrapping up the weekend with the #SEAvORL highlights 🎥⤵️ pic.twitter.com/7h6CBEmRum

Both Alanna Kennedy and Emily van Egmond played full games for Orlando in that 0-0 draw.

Over the weekend Lay featured in both of the team’s matches, scoring a goal in their 7-0 win over Genesee FC and playing a full game in their 2-2 draw with Michigan Legends.

Elise Kellond-Knight’s Hammarby had the weekend off after playing two matches in quick succession last week.

Aivi Luik’s IFK Kalmar went down 3-0 to Eskilstuna. Kalmar are rooted to the bottom of the ladder with only one win for the season.

There was no Toppserien action this weekend as there were Norway Women’s Cup matches midweek.

Tameka Butt and Klepp were 3-0 winners over Hinna while Mackenzie Arnold’s Arna Bjørnar won 4-1. This means both Aussies have progressed through to the third round of the cup.

In NPL Victoria, Lisa De Vanna came off the bench and scored in South Melbourne’s 3-3 draw with Calder United. Melbourne Victory player Angie Beard was on the scoresheet for Calder.

Chloe Logarzo’s Blacktown Spartans recorded a 3-1 win over the Northern Tigers; Eliza Campbell was in goal for the Tigers. 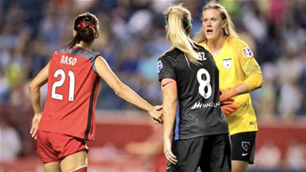 Aussies abroad and at home: June 4-16