The European leagues may have taken a break due to the fast approaching Olympics but in the United States it's business as usual as the WPSL Elite and the USL W-League enter the "business" end of their competitions.

The European leagues may have taken a break due to the fast approaching Olympics but in the United States it's business as usual as the WPSL Elite and the USL W-League enter the "business" end of their competitions.

Making the long journey from Tokyo, several of the Matildas returned in time to be part of last weekend's action.  Here is your Aussies Abroad wrap from 10 July 2012 – 16 July 2012.

In front of another sell out home crowd (their biggest yet of the season), the Boston Breakers defeated Philly Fever 2 - 0 to remain at the summit of the WPSL Elite.  Clad in their "Project Pink" guernseys, the Breakers took control of the contest early and never relinquished it.  Sustained pressure finally saw Katie Schoefpfer brought down with the striker converting the penalty.  In the 42nd minute Courtney Jones grabbed a second for the home side with Phllly never finding answers in the second half.

Although a little travel weary, Kyah Simon was substituted into the game on 70 minutes with immediate impact. Replaced as the WPSL Elite leading goalscorer while away, Simon twice went close to netting her 13th goal of the season with only good saves from the Fever 'keeper denying her a return to the top. Matildas' Tameka Butt was an unused substitute.

It was a good week for Emily van Egmond and her Western New York Flash in the WPSL Elite.  A mid-week 5 – 0 demolition of FC Indiana and confidence boosting 2 – 1 win over former ladder leaders the Chicago Redstars sees the Flash grab a share of first place.

Unbeaten in nine matches, the Flash went into their clash with FC Indiana full of confidence and within 5 minutes were ahead courtesy of Spaniard Adriana.

From then on it was all the visitors Van Egmond doubled their lead with a trademark stunning 18 yard strike.  Pouring on the pressure, the Flash had a third just prior to half time with Adriana putting away her second of the match to give them a commanding 3 – 0 lead.  Second half goals from Jodi Ann Robinson and a Katy Frierson capped off an excellent performance.

The good form continued for the New Yorkers against close rivals Chicago Redstars with Adriana also continuing her rich vein of scoring.  In a cagey affair, WNY Flash eventually took the lead in the 42nd minute courtesy of a stellar Adriana free kick.  Chicago hit back a minute later only to have the goal disallowed for interference on Flash, and Sydney FC Women's, goalkeeper Ali Lipsher.

Van Egmond was subbed into the contest on 65 minutes and was quick to find holes in the Redstars' defence.  Katy Frierson eventually broke it open in the 75th minute with her half volley doubling the home side's advantage.  Again Chicago hit back quickly through Lauren Alkek, with the goal standing on that occasion.  Despite the Chicago pressure, the home side were able to  hold on to remain unbeaten in 11 games.

Brooke Spence scored a captain's goal for the Colorado Rapids Women as her 62nd minute strike proved the winner against the Vancouver Whitecaps.  With Spence marshalling the defence, the Rapids absorbed plenty of pressure in the first half to keep the scores level going into the break.

Just past the hour mark, Spence broke the deadlock with her 25 yard strike taking a deflection before giving the home side a 1 – 0 lead.  Solid defensive work in the second half ensured that Spence and the Rapids would end their season on a high.

Servet Uzunlar's Pali Blues wrapped up top spot in the USL W-League Western Conference with a 1 - 0 win over the Seattle Sounders Women.  The scoreline may have been tight but, on the back of a player of the match performance from Uzunlar, the Blues were rarely troubled in the encounter.  Well on top in the first half, Pali were unable to breakdown a stubborn Sounders' defence.  Uzunlar went close to opening the scoring in the 62nd minute only to be denied by the Seattle goalkeeper.  Less than 10 minutes later, the Blues finally got their goal, with Liz Bogus getting on the end of a cross for the winner.

The Pali Blues are once again set to face off against the Seattle Sounders Women this weekend, this time for the Western Conference title and a chance to play off for the USL W-League title.

Amy Chapman and Caitlin Munoz's LA Strikers have finished a disappointing season with a 4-1 loss to Santa Clarita Blue Heat.  Three goals within the first 11 minutes of the match killed off the contest with the only bright spot for the Strikers a late consolation goal deep into extra time.

Matildas' midfielder Katrina Gorry shook off a long flight to manage 30 minutes for the Ottawa Fury in their 2 – 1 end of season loss to the Quebec City Amiral.

Dominant in possession the Fury were unable to capitalise despite the best efforts of Mallory Outerbridge and Courtney Wetzel in the opening minutes.  The home side was punished for being wasteful with the Amiral take the lead on the half hour.  The Fury equalised not long after but, in spite of the lively Gorry being introduced, it was the visitors who would break the deadlock in the 75th minute before holding on for the win.

Despite the loss, the Ottawa Fury finished on top of the USL W-League Central Conference and will host the Conference Championship this weekend. 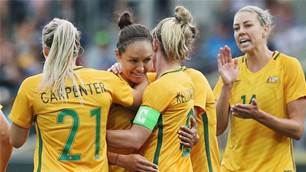 Western to pounce on faltering Glory in AL