WNBA All-Star voting commenced recently, and Liz Cambage continued to show why she deserves to be selected with another pair of solid performances to provide the highlight of the week for the Australians in the WNBA.

In the final game before fellow Australian Cayla George became available for the team, Liz Cambage and the Dallas Wings took on the league powerhouse Minnesota Lynx who are currently on a charge to atone for a lacklustre start to the season.

As was the case earlier in the season, the battle between Cambage and reigning league MVP Sylvia Fowles featured front and centre. Fowles perhaps got the best of Cambage as the Lynx secured a 91-83 victory, but Cambage was still able to deliver 16 points, 9 rebounds, and an impressive 5 assists in 34 minutes of play.

.@CaylaGeorge22 getting her first action as a member of the Dallas Wings and quickly showing fellow Aussie @ecambage that she's not the only big that can drain 3s around here! 👌 #CGForThreeeeeeeee pic.twitter.com/YXPY0eUS9O

The Wings well and truly made up for the loss to Minnesota with a 101-72 demolition of the league-leading Los Angeles Sparks.

Cambage played just 21 minutes, but shot an incredible 9 of 10 from the field to finish with a game-high 20 points as well as 5 rebounds as Dallas grew their lead in each quarter to round out the 29-point victory.

Cayla George also featured for the Wings for the first time this season, tallying 6 points on a pair of threes as well as 3 rebounds in 12 minutes despite having only passed her physical the day before and not actually trained with the team prior to the game.

.@ECambage is up to 20 PTS on @NBATV, her career high for points in a half!

However, the Wings came back to Earth slightly in their final game of the week against Sami Whitcomb and Seattle.

Despite 20 first half points from Cambage, the Wings trailed 49-42 at halftime, and despite trimming the margin in the third quarter, succumbed to the Storm’s dominance in the final term, falling 97-76. Cambage finished the game with 23 points, 9 rebounds, and 3 blocks, whilst George finished with 2 points in 5 minutes off the bench.

On the other side, Sami Whitcomb enjoyed one of her best performances of the season, knocking down 4 of 8 from beyond the arc to tally 12 points, 3 rebounds, 2 assists, and 3 steals in 16 minutes of action.

Sami Whitcomb joining the 3-point party in Dallas 👌@SamBam32 drains her 2nd triple and @seattlestorm have 7 as a team! #WatchMeWork pic.twitter.com/h2Kx9bCsQt

Earlier in the week, Seattle had played Las Vegas, falling 89-77 despite being tied at 64-64 going into the final quarter.

Whitcomb played 9 minutes off the bench, but went scoreless after missing all 3 of her field goal attempts, each of which came from beyond the arc.

The Storm then faced the cellar-dweller Indiana Fever, and despite facing a tougher test than the on-paper matchup may have forecast, the Storm did manage to come away with a 72-63 victory.

Whitcomb saw 6 minutes of action, hitting 1 of 2 from three-point range to tally 3 points as well as a solitary rebound.

Bec Allen continues to find playing time difficult to come by in New York, playing just a solitary minute off the bench as the Liberty held off Atlanta 79-72, despite Dream star Angel McCoughtry tallying 39 points and 14 rebounds.

The Liberty then travelled to Las Vegas to take on the Aces, with Allen not seeing any playing time in the team’s 88-78 defeat to the rapidly improving Aces.

Fortunately, Allen saw slightly more action in the team’s final game of the week against Los Angeles, but the Liberty fell to a heavy 80-54 defeat in which the Australian wing finished with 2 points, an assist, and a steal in 6 minutes off the bench.

The high-flying Phoenix Mercury saw their eight-game winning streak snapped with a pair of losses this week, but Leilani Mitchell rounded out the week impressively.

However, there was little to write home about for many of the Mercury players in the team’s 83-72 loss to Minnesota, with Steph Talbot finishing scoreless in 8 minutes of play and Mitchell adding just a pair of free throws in 10 minutes, going 0 of 4 from the field in the process.

Leilani Mitchell drills it before the halftime buzzer!@PhoenixMercury trim deficit to 47-43 at the break on League Pass pic.twitter.com/107vexuoD1

However, Mitchell produced a much-improved performance against Chicago later in the week. With the Mercury in foul trouble, Mitchell saw 21 minutes off the bench and took full advantage.

Known more as a shooter, and with good reason, Mitchell also showed that she can dish out assists with the best of them, tallying an impressive 7 dimes alongside 5 points, whilst Talbot tallied a pair of free throws in her six minutes off the bench.

However, with star centre Brittney Griner ejected for a flagrant foul in the third quarter, and many of the Phoenix starters in foul trouble, Chicago were able to take full advantage and secure a 97-88 victory, dropping the Mercury to 10-5 in the process. 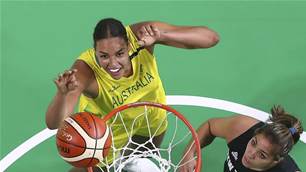