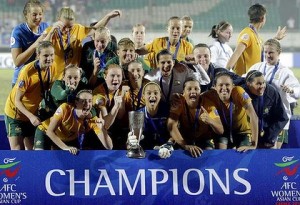 The Asian Cup will be a two group format consisting of four teams, with the top two nations moving through to the semi finals (and guaranteeing a World Cup berth).

Since the draw details were announced last week, there has been a slight change to how the groups will be shaped.

Previously, the groups would be made up from one team from each of four pots, with countries placed in pots according to seeding. The four pots were:

As a consequence, there  was a very real possibility that one group could have had Australia, Japan and Korea Republic with either of Myanmar or Jordan.

The new format will see Australia (as the no.1 seed and defending champions) drawn to play one of the other top-ranked four Asian teams (Japan, China or Korea Republic) plus either Vietnam or Thailand, and either Myanmar or Jordan.

Matildas coach Hesterine de Reus and AFC Vice President Moya Dodd will both be present at the draw.

Who do you think the Matildas will be drawn to play?