When it comes to Australian women's football, talented teenagers are a dime a dozen and in 2008, Dubbo born and bred Ashleigh Sykes was part of the latest crop looking to make their mark in the new W-League.

When it comes to Australian women's football, talented teenagers are a dime a dozen and in 2008, Dubbo born and bred Ashleigh Sykes was part of the latest crop looking to make their mark in the new W-League.

Despite her electric pace on the pitch, slow and steady has been the ethos behind Sykes' development into the premier player in the W-League with her crowning as the 2015/16 Julie Dolan Medallist.

It has been a memorable twelve months for Sykes.  From Perth where she led Canberra United to a second championship, to Winnipeg, where she made her World Cup debut with the Matildas, and back Canberra for another award-winning season with United.

Sykes now finds herself in Himeji, Japan for the season with AS Hamira Albion where she has made a goal scoring start to the season.  In between running errands and training, the forward caught up with The Women's Game's Winona Writer.

Despite how influential the 24 year old has been, you can hear genuine surprise in her voice at being voted the W-League Player of the Year.

Ashleigh Sykes: I was pretty amazed to be honest. It’s all been surreal, hearing about it here in Japan. Seeing all the photos, it’s really special. It’s also been really nice getting congratulations, messages of support from all over.

In ideal circumstances, I would have liked to be there, to celebrate it and enjoy the award back home. But it’s great. It capped off a really good season for Canberra United too. A lot of us hit our straps, so it was good to see that recognised.

I asked her how much awards weigh into her career planning, as she mulls where to play next season.

AS: Awards are great. But at the end of the day, I’ve learnt the importance of playing for my personal goals and fulfilment. It’s easy to get caught up worrying about what others think of your game, but you need the confidence in yourself to progress with or without that. Where I go next will be about what is best for my football career.

This is clearly something Sykes has learnt along the way.

AS: I’ve learnt a lot, definitely, after starting in the [W-]League at 16. Through lots of growth and some mistakes, I’m more looking inward in my football, staying in my own head. 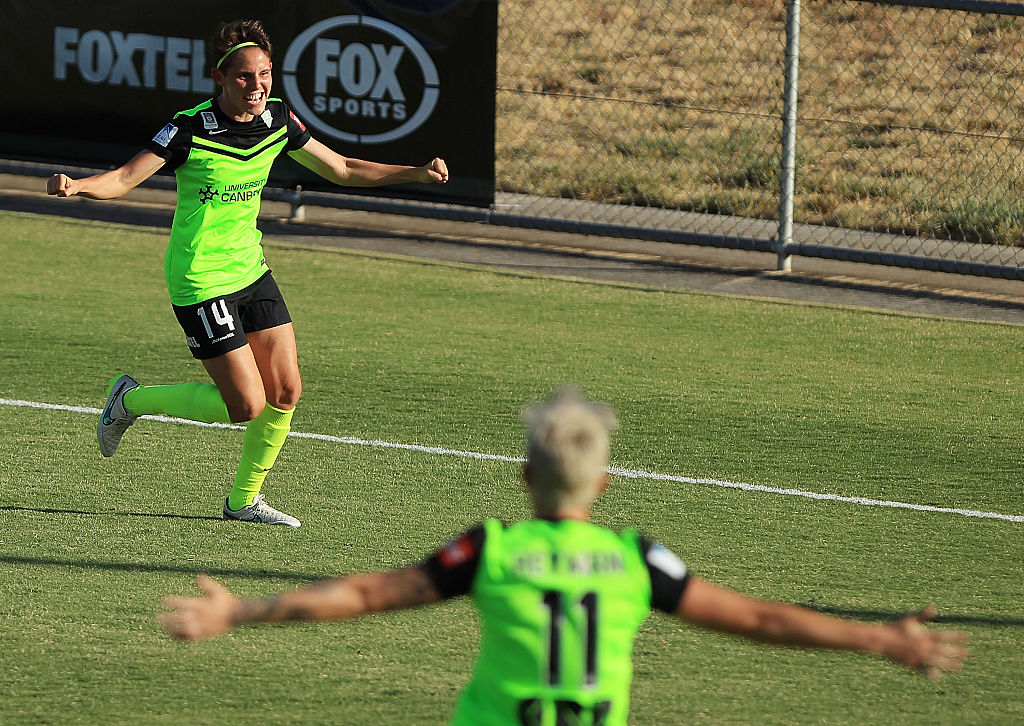 Sykes celebrating one of her seven goals in the 2015/16 season (Photo: Stefan Postles/Getty Images)

I’m speaking with Ashleigh Sykes in Himeji, a small city “by Japanese standards”, just south of Osaka. She’s playing in the second division of Nadeshiko, the Japanese national football league. I can hear her smile as I tell her it’s colder in Canberra today than where she is.

AS: I’m enjoying the challenge that football in Japan is bringing. And also liking the idea of escaping Canberra’s winter, which can be harsh at times.

Arriving in Japan for the first time three months ago, the pacy United striker left summer for snow.

AS: It was chilly when I first got here. There was some snow. It was a bit of a shock on arrival, but luckily it’s not a very snowy area. It’s nice now; it’s starting to get warmer. We’ll have the rainy season later on, which is long.

I’m enjoying being in Japan from a lifestyle perspective too.  Living here, learning about the culture, finding my way around.

It’s my first international contract.  I’ve played my football in Australia up to this point, so it’s quite different. There are two divisions. The second, which I’m playing in has a promotion/relegation element that is different to the W-League. There’s playoffs, the championship below as well, it makes it interesting.

"Through lots of growth and some mistakes, I’m more looking inward in my football, staying in my own head."

My only reference point up to this point is the W-League, which I’d say is almost on par with the top league here. The top division is quite a strong league, with the national players.

It’s a different style of play here, not unlike the Japanese national team. Where the national team is a step above, they’re different again of course.  There’s a bit more long ball play, which has been good for me, a good challenge.  I’m learning to plan that transition, and scrapping a bit more.

Sykes scored her first goal in a game two weeks ago and is already proving to be a core part of the team.

AS: I was pretty happy to get one on the board. We’re 5 games in, and headed to Tokyo for another this weekend.  We’re mid-table at the moment, with the team’s main aim to fight for promotion. Hoping to get a few more wins under the belt for that.

After playing a lot of football with one core consistent squad, Sykes is getting to know a completely new team with AS Harima Albion, in a language that’s new to her. It has taken some adjustment but it has been a welcome change.

AS: It took a while to get used to different players, what they like, how they play. I’ve had the luxury at Canberra of that not changing much. The biggest barrier is language of course. I’m new to Japanese, and though a lot of the girls are helpful, and try to speak English, some things are lost in translation. It’s a work in progress, working to click together.

It is a challenge she is relishing, where even her trademark speed is new to teammates.

AS: I think at the start there was some surprise about my speed.

"‘Oh, you’re fast!’ They’re not as used to having that in the squad, so it’s been about learning how to deal with that speed, working out where I should be getting the ball."

With training scheduled at night, and much of the team working day jobs, Sykes is running errands for her team/housemates, and sounds delighted to be getting to know a city a bit larger than, and more than twice the population density of Canberra.  And she’s fielding some enquiries about the W-League and Australia from teammates.

AS: Sure, yeah a few have already asked about it. They’ve heard good things about Australia.

If any of the (W-League) coaches are interested, I’m happy to put them in contact with players over here. A number have said it looks like a good challenge, so we’ll see how that goes.

The progression of Ashleigh Sykes has seen her transition from the assist maker and the goalscorer.  It has added a different dimension to her game and also seen her break into the Matildas, appearing in the last three major tournaments; the 2014 Asian Cup, 2015 Women's World Cup and 2016 AFC Women's Olympic Qualifiers.  Although the latter saw Sykes prove a handy last minute replacement in the Matildas squad that qualified for this year’s Olympic tournament. She didn’t have to travel far, but it came as a surprise.

AS: It was a bit of a shock. It happened so quickly. The week before I had arrived in Japan, so it was a short trip to Osaka to join the girls. It was sad to see Larissa (Crummer) injured, but good that it was not too serious an injury, she looks right for Rio.

She joined a Matildas squad that was building, a playing group that had benefited greatly form multiple camps. And it showed.

AS: It was so good to see the progress made in the period I’d been out of it. Everyone was clicking; everyone was on form. They were in that zone. It was great to be a part of that. To qualify, was a dream come true. 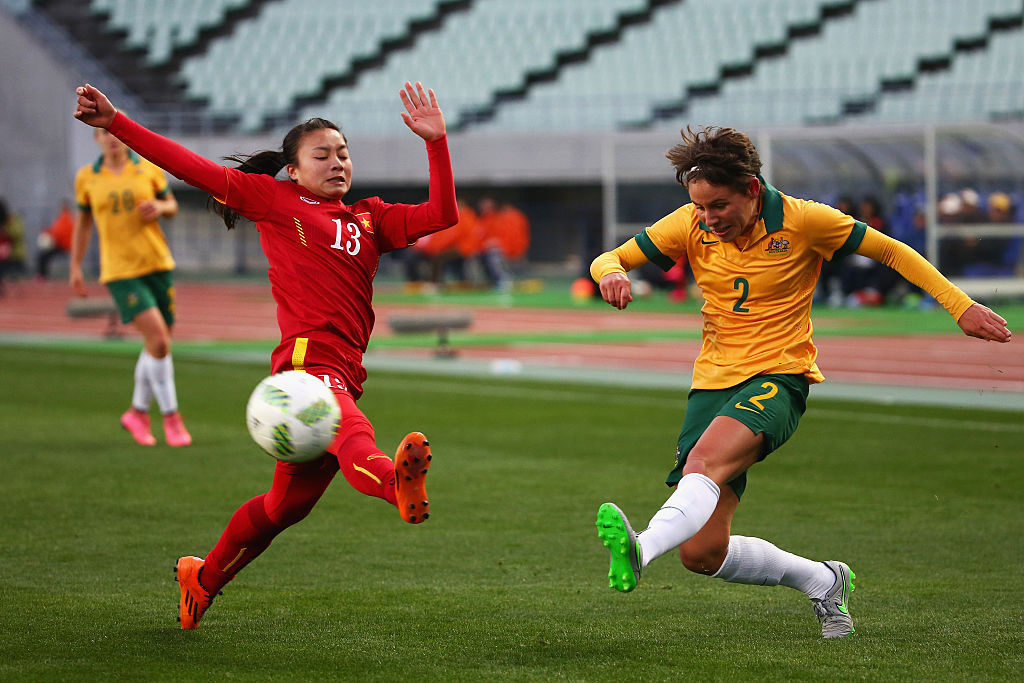 Sykes found the back of the net against Vietnam in the WOQ (Photo: Getty Images)

As the last Matilda in, Sykes was also most definitely the first one back to work.

AS: And, then it was straight back in for trial games on waterlogged fields. It was back to reality. But for a few weeks, there was this great glow of qualifying. And all the attention back home, it’s exciting. It was good to see that type of support, and that that continues back home.

When probed on whether she’s available for Rio, Sykes is philosophical.

AS: It’s not so much making myself available, it’s also getting picked.  The squad for Rio is so small, and there’s a lot of talent, particularly in my position. The competition for spots will be high. I’m playing it by ear.

If Staj wants me, that’s fantastic. If not, awesome. It was nice to be able to help the team qualify, to be a part of that. And I will be cheering from Japan.