The 25-year-old is days away from her 100th week on top of the women's rankings.

Current world number one Ash Barty is about to pass a new tennis milestone when she enters her 100th week as the top ranked women's player.

The 25-year-old Australia has won two Grand Slams, the 2019 French Open and the 2021 Wimbledon Championship.  This year's win meant that Barty has registered victories on every type of surface.

Former Australian Fed Cup captain David Taylor thinks Barty will stay at the top of the tennis world for some time yet.  Speaking to the Australian Associated Press, the now coach said of his compatriot:

“She's so well-rounded. So tactically aware. Serve, forehand. There's not a lot of weaknesses in Ash's tennis and, if you look at the great No 1s, they're all well-rounded like that.
"In this time where the women's tour has a lot of different grand slam winners, she's definitely brought some consistency to the No 1 spot."
Taylor went on to compare Barty to former world number one Martina Hingis, whom he coached and helped reach the 1999 French Open final, as well as Roger Federer.
"She's like an upgraded version.  Still to this day, of the people I've coached, Martina was the most amazing how she could walk off the court and dissect a match with the clarity of a coach, an onlooker," Taylor said.
"The only other person I've ever taught who had first-hand knowledge of that was when you talk to Ash about Tennis.
"Like, she understands Tennis.  She's by far the best tactician on the women's tour.   She's so good at that."
"She's got so many ways," Taylor added to the AAP.
"You look at Roger, he can tactically win with such an array of tactics and having coached on the WTA Tour for so long, you're often left with quite a very narrow set of tactics for most of your players on there.
"With Ash, she's dangerous on all surfaces, which she's obviously already proven, and she's won the two biggest Grand Slams on the most contrasting surfaces so she's got a lot of ways to win matches.
"Definitely has a lot of massive problem-solving abilities and tactically can put girls in such challenging situations because of the breadth in her game.
"She's the best player in the world. I'm stating the obvious but she really is the best tennis player, not just the best ball striker.
"No doubt the player of the year. The WTA has a lot of great ball strikers but she's a great tennis player and that's the big difference."
The WTA rankings were first instituted in 1976.  Since their inception seven women have spent more than 100 weeks as World number 1: Steffi Graf (377 weeks), Martina Navratilova (332 weeks), Serena Williams (319 weeks), Chris Evert (260 weeks), Martina Hingis (209 weeks), Monica Seles (178 weeks) and Justine Henin (117 weeks).
Barty is currently in her 99th week at the number one spot. At present Aryna Sabalenka is ranked second and Karolina Pliskova is third.
She recently returned to Australia completing her two-week hotel quarantine last month according to foxsports.com.au.  Barty has opted out of the Billie Jean King Cup taking place next month and will likely miss the WTA Finals as well.
Her 2021 season is therefore assumed to be over prior with the chance of Barty playing in competitive matches in doubt prior to the Australian open next year.
As Barty has nearly 2000 more points than Sabalenka and almost 4000 more points than Pliskova, she should not only achieve the 100 weeks milestone later this week but she should also remain on top for some time. 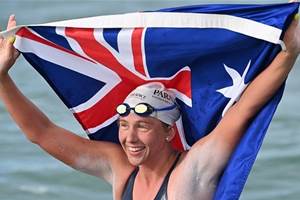 Australian Chloë McCardel has broken the English Channel swimming world record after accomplishing her 44th crossing, the highest number for any single swimmer.
[571041]
The full WTA rankings can be found using this link.