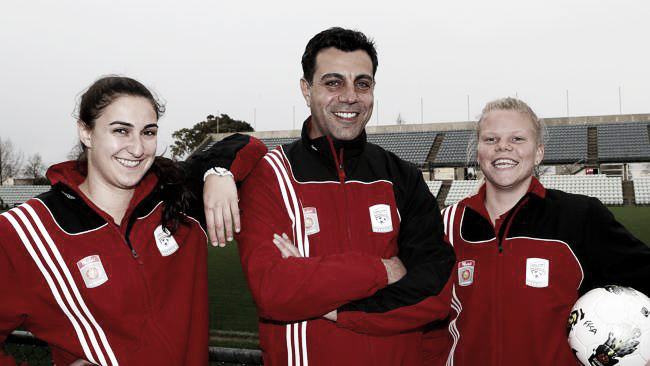 The Premier's Plate in the first season and a grand final appearance in the second (although the match itself is one he would rather forget), the former central midfielder was a key component during the club's most successful period in the competition.

When it comes to the Adelaide United W-League team, well, it has almost exclusively known disappointment.

So when it was announced a month ago that the Reds' legend would be the new Head Coach of the Lady Reds it was met with some surprise.  No-one was more surprised to be in the position than Aloisi himself.

Coaching West Adelaide SC in the South Australian State League competition, the 40 year old received a call late one week from Football Federation South Australia's Technical Director enquiring if he was interested in the position vacated by David Edmondson at the end of last season.

With a weekend to consider the proposal, Aloisi sounded out his wife, club and brother John, Head Coach of the Melbourne Heart.

"He [John], as well as my wife, was one of the main reasons why I took on the job," said Aloisi.

"He was very positive and told me to use it as an opportunity to learn and to develop."

After making the decision things progressed quickly and less than a week after the initial contact, Ross Aloisi was announced as the new coach.

There is no tip toeing around the fact that, despite improvements in the last two seasons, Adelaide United have struggled to make inroads and find consistent success in the W-League.

Wooden spoons in all but one season, and yet to hit double digits in the wins column (just 5 wins in 52 matches), the Lady Reds have endured a torrid time.  As an outsider coming in Aloisi has identified the pervasive defeatism culture as one area that needs improvement.

Easy in words but, as previous coaches can attest to, difficult in deed.

"There have been issues with the Lady Reds and there needs to be a change; a cultural change."

"I do like to communicate with the players but I also think that with the Lady Reds there needs to be a better direction."

On the pitch Aloisi has already identified several areas requiring improvement and is the final process of assembling a coaching team that will address them.  Number one; conditioning.

"We want to play a good brand of football, to play possession based football and that requires a good base."

"Having that base, I think that will change the mentality of the group as well."

As to that playing group, that is still a work in progress.

One player confirmed, and the first name on the team sheet as far as the new coach is concerned, is long time Matildas goalkeeper Melissa Barbieri.

[More: The Fighter: Bubs bounces back]

Looking to return to the pitch after giving birth, Barbieri was struggling to find a team to return to.  Aloisi met the goalkeeper at an coaching course and, once he took on the Adelaide job, he knew exactly where to go for his first big signing.

"I was clear on who I wanted and I said to the Federation [FFSA] that Melissa Barbieri is the name that I want."

"She is a leader, she has been around for a long time, is a good communicator and she knows the W-League."

"She will have a lot of input with the girls on the training pitch and on match day as well."

Along with Barbieri, Aloisi has talked goal scoring midfielder Kristy Moore into returning and acquired international Laura Stockdale, with the experienced trio set to form the backbone of the team.

The rest of the squad is currently being finalised and, while he is looking to sign a core group of South Australian's first, in the end ability not geography will determine who pulls on the Red jersey this season.

"In the end I am looking to get the brand of the Lady Reds up there in South Australia, to bring a professional mentality back to the Lady Reds, change the culture and play a good brand of football."

For the sake of the Reds hopefully all of that will equate to points on the board.