Tomorrow (April 18) marks the last day of the Sign and Trade Period so it's not long until we know where everyone will play in 2020.

So let's find out what happened on Wednesday.

The club today announced the signing of Nat Exon and Kate McCarthy, as well as confirming Peta Searle as senior coach.

“I am super excited and very privileged to be the one taking charge of the inaugural women’s team,” Searle said.

“I grew up watching footy at Moorabbin, so to be able to bring footy back here through our women is really close to my heart.”

Searle was the first woman to hold a coaching position with an AFL club when she joined St Kilda in 2014 and assumed the role of Head of Female Football Pathways and VFLW Senior Coach in 2018.

St Kilda also added Brisbane Lion McCarthy, who was named in the All-Australian team in 2017 after proving a revelation as the Lions stormed into the AFLW Grand Final.

To every single Lions fan who has supported me over the past 3 seasons, I want to thank you. To the staff and coaches who have worked closely to improve me as a person and a player, thank you. To my teammates, you have always been there through the highs and the lows and ALWAYS laughed at my horrible jokes. I have loved my time at this club and will forever cherish the opportunity I have had to play AFL football for the Lions. I wish this wonderful club nothing but the best for the future. ⠀⠀⠀⠀⠀⠀⠀⠀⠀ I am excited about the new opportunity that presents itself at the Saint Kilda Football Club. I have been offered a dream role at the club which will help to set me up with a career after football. I cannot wait to see what the future holds. @stkildafc ⠀⠀⠀⠀⠀⠀⠀⠀⠀ Pretty damn excited to have one of my best mates by my side at the Saints too! @nat.exon 🔴⚪️⚫️

Exon also joins her teammate McCarthy at the club. She rose to prominence with Carlton in the inaugural season of AFLW as a hard-running midfielder, before joining Brisbane in 2018.

“For me the most exciting part is that it’s a brand new team, so we get to play a role in shaping the culture of the club and also be among the first women to play for St Kilda and give the members an opportunity to see women running around in the St Kilda guernsey,” McCarthy said.

Nicole Bresnehan and Daria Bannister are the latest Kangaroos to re-sign after impressive seasons.

Bresnehan, who has been secured until at least the end of 2021, had an immediate impact in her first AFLW season, after being selected with the club’s last draft pick at No.61 in 2018.

Launceston product Bannister made a successful recovery from an ACL injury and is hoping for an injury-free run.

She's looking at playing in a few games in the state league (TSLW) depending on advice from North’s medical team.

"They will monitor me throughout the whole season so I'll play a couple of games here or there," she said.

"Obviously, I want to get a couple of games under my belt, but I will keep the communication open with North to see what happens from here on."

The announcement comes after Tahlia Randall, Danielle Hardima, Jasmine Grierson and Daisy Bateman all re-signed for another season on Tuesday. 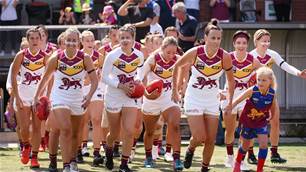 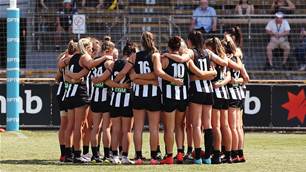