The season is only four days away TWG AFL team looked at the practice matches between eight teams last week.

It was a close game between the two sides in the first hit out of the practice matches for the AFLW.

The Demons have found a strong forward duo, with draftee Tegan Cunningham, a former WNBL basketballer, kicking three goals in a half alongside Alyssa Mifsud who scored one.

Former Giants Ashleigh Guest was also impressive for the Demons.

The Pies kicked the last five goals of the match to steal a three-point win.

It was a bittersweet ending for Collingwood as Guttridge broke her collarbone in the final minutes.

It was a surprising result in the five quarter (fifths maybe) game as the minor premiers went down to the GWS Giants.

It was a hot morning with the temperature gauge rising to 32-degrees.

The Giants slotted three goals in the first quarter and by halftime they had a 29-point lead.

The Lions put up a fight as Jess Wuetschner, Sophie Conway and Kate McCarthy kicked goals in the third quarter to close the gap to 12-points before the fourth.

Brisbane struggled to keep pace and be competitive against the Giants as they finished the game 45 - 26 but each team agreed to a final 'fifth' quarter.

It was an opportunity for both teams to push themselves in the final two weeks of pre-season.

The Giants put the lead out to 50 points. 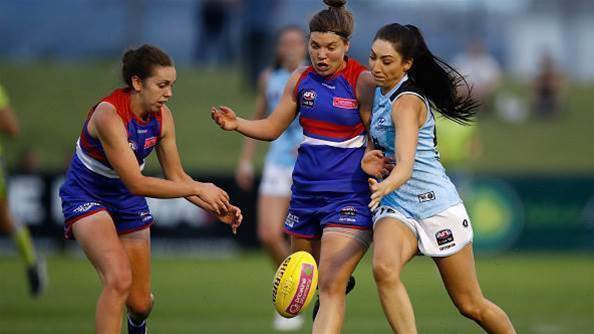 It was a feisty opening quarter from both teams but former Lions marquee Taylor Harris got the Blues off to a good start scoring a goal from fifty metres out.

However, the Bulldogs drew level just before quarter time.

The match opened up in the second term as the Blues scored three consecutive goals within six minutes.

However, Ellie Blackburn inspired a momentum shift for the Dogs after kicking a goal.

The Blues went into the third quarter just two points ahead as captain Bri Davey and Katie Loynes joining the list of scorers for Carlton to give them a four-point lead going into the last term.

The last quarter saw the Blues add two majors while the Bulldogs could only manage two behinds.

It was another surprising loss in a trial match as the reigning AFLW Premiers, Adelaide Crows went down to Fremantle.

Crows midfielder Hayley Miller was influential during the second half using her pace to set up two goals.

The game was tied up with only five minutes remaining when Ashlee Atkins delivered a match winning tackle in the Dockers forward line.

After the Crows didn’t return the ball correctly, Atkins was gifted a 50-metre penalty and put Freo back in the lead.

Stacey Barr was awarded another free kick minutes later and lined up 20 metres out to kick her third and seal the game.

The first round of the 2018 AFLW begins February 2 between Carlton and Collingwood at Ikon Park. 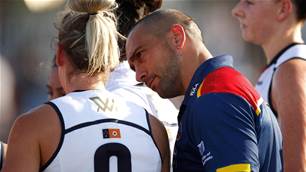