One of the many young players that have taken the 2020 AFLW season by a storm is Gold Coast Suns Rising Star nominee Kalinda Howarth.

It was a dream come true for the 20-year-old Gold Coast native when the Suns announced her priority signing to the club before the 2019 draft. A life-long supporter of the club, Kalinda “Kindy” Howarth has been open about what it meant to her, to be handed this opportunity.

"I love this club with my whole heart."

Kalinda Howarth is the 21st player to be signed to our AFLW list. Congratulations, Kalinda!

Howarth wasn’t new to the AFLW, having been signed by the Brisbane Lions in 2017, but she is open about the fact that she probably wasn’t mentally prepared for the difficulties of a full AFLW season.

She was delisted from the Lions after the 2018 season, never having managed to make her debut on the national stage. While she may not have been able to make the most of her first appearance in the women’s league, she has consistently demonstrated her talent since her teen years.

Howarth had only been playing the sport for a few years when, in 2016, she was selected to play for Queensland in the Under-18 Championships. With a slew of early sporting achievements and honours under her belt, it’s pretty clear that Kalinda has well and truly earned her recognition as an up-and-coming player for the Gold Coast expansion team.

She has been a player worth watching since the beginning of the season, but it was in the Round 3 inaugural QClash when the two QLD teams came together that she really shone. Scoring three of the four goals against her old side and earning the Rising Star nomination, it felt as though she had a point to prove.

From finding herself in and out of a mental health ward, to a 2020 NAB AFLW Rising Star nomination, @GoldCoastSUNS' Kalinda Howarth's perseverance is something to behold: https://t.co/28TdqK4SpG pic.twitter.com/20o9QcyOM3

She has been improving in each game she plays, earning praise for her energy and her ability to read the ball. Her disposal count is also mounting steadily and we look forward to seeing what she will bring to the remainder of the season as the Suns battle it out for the opportunity to play in the finals. 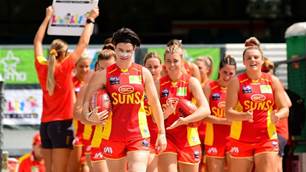