With the last round of AFLW set to kick-off tonight and grand final spots up for grabs, the biggest match of the round won't be on the main channel for AFL.

The Western Bulldogs and Melbourne Demons are playing for the minor premiership tonight, which is unlikely to get them a home ground advantage for the grand final, but it set to be the biggest clash this season.

However, the match is being tucked away on 7Mate for FTA customers with Channel 7 choosing the broadcast 2016 version of The Jungle Book instead.

The match will still be broadcast on Fox Footy and through the official AFLW app.

It is the last round of the AFLW before the AFL kicks-off on March 22 and the pre-season has even concluded for the regular one week break before the season. 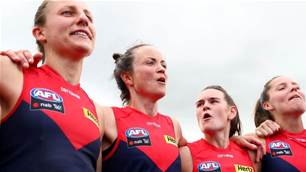