What is the highlight of our great game?

For many of us, it is the majestic sight of a player leaping onto the shoulders of an opponent and taking a screamer from an impossible height. For others it can be a bone-rattling bump or a team-lifting smother.

For myself, nothing beats a player running at full tilt, opponent in pursuit, being able to withstand the pressure from behind to drill a straight kick over the goal umpire’s head for a goal. Fortunately for me, in the AFLW 2020 season, I did not have to wait too long for such a highlight.

Vote 1️⃣ Cranston 2020 🗳 Rocky's incredible finish is one of three AFLW goal of the year finalists.

At the 01:54 minute mark of the second quarter in the first round clash between Fremantle and Geelong, Cats veteran and crowd favourite Richelle “Rocky” Cranston kicked what I consider to be the AFLW Goal of the Year. Cranston, a dashing half-forward/midfielder who has been a consistent performer and one of the more recognisable personalities since the AFLW’s inauguration, found herself on the half forward flank with Fremantle defender Evangeline Gooch closely in tow, when Cats teammate Olivia Purcell’s kick bounced perfectly in front of Cranston, allowing her to run onto the ball.

Cranston, with nary a half a metre on the determined Gooch, gathered the loose ball, tucked it under her arm and put on the afterburners. Running at full pace, Cranston took a bounce and audaciously handballed to herself as she entered the forward 50. Gooch, herself no slouch, was unable to chase down Cranston, who was now approaching 30 metres from goal and with an opportunity to make a name for herself.

As evidenced by the goal umpire’s lack of lateral movement, and his head tilted back to the sky above, Cranston’s kick for goal split the middle perfectly, elating her teammates who raced to her to celebrate.

The goal was Cranston’s first of five for the year, a season equalling best for the 30 year old. Cranston, who had previously played American Football, was playing for the North Geelong Magpies when she was drafted by Melbourne with pick 24 in the 2016 AFLW draft. After two consistent seasons with the Demons, Cranston was recruited by Geelong as an expansion selection in 2018 before going on to win their VFLW club Best and Fairest that same year.

Unfortunately for Cranston, the Cats brave attempt to take on a formidable Fremantle lasted until three quarter time, after which Fremantle kicked the remaining two goals for the game and began their undefeated streak. For Geelong, it was a shining highlight from a disappointing season that yielded two wins from their six games. 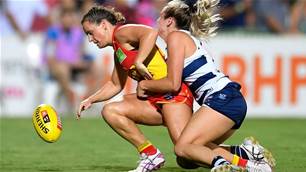 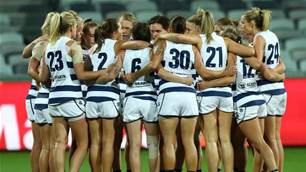