Fresh from two incredible goals overnight it's safe to say that Mary Fowler is the brightest young prospect in Australian football. So Adelaide's new signing may prove very influential...

The Reds have secured the loan of former US youth international Mallory Weber, who may not be a household name now, but at one stage she was one of the most prodigious young striking talents in world football.

Now 25, Weber burst onto the scene at US College team Penn State, where she scored a whopping 36 goals in 100 appearances to become one of the most prolific strikers in the team's history.

But the goals didn't flow nearly as easily at NWSL level. Over 44 appearances, the diminutive forward only converted once. After her 2019 trade to the Utah Royals, she hasn't scored yet.

Hence why the signing becomes a very interesting one for Australian football's hot topic, Fowler. Only 16-years-old, she's still at the very beginning of her career, about to entire elite league competition for the first time. 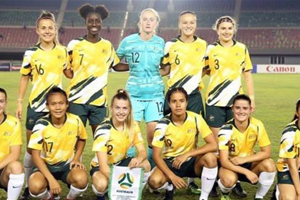 “Mallory is a dynamic forward who will offer us plenty in the offensive third of the park, but her experience in the NWSL will be invaluable to our young squad as we look to improve upon last season," hailed Adelaide boss Ivan Karlovic.

“Obviously the season is just around the corner and we have a few more spots to fill and we’re looking forward to announcing them in the next few days as well.”

Karlovic may have hit the nail on the head when he said experience.

We're all expecting big things from Fowler this season.

Even Ivan Karlovic admits that after a series of Matildas caps and a World Cup call-up "she's arguably one of the most experienced in the squad".

But that change in lifestyle that comes with W-League football over WNPL, not to mention the relentless pressure that comes with being a teenage prodigy, well that's a little harder to compensate for unless you've been there yourself.

Weber has. She's arguably the only one of Adelaide's signings this season that can truly relate to the attention Fowler's receiving at the moment and her influence could prove key at such a fundamental stage of Fowler's career.

Let's hope for Australian football's sake she can be a positive one.