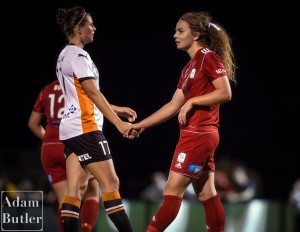 A late goal from teenage sensation Emily Condon helped Adelaide United earn a point with a 1-1 draw in their last home game against Brisbane Roar.

The temperature soared all day in the low 40’s in Adelaide; hence the game was at first postponed until 7.30pm.

Even at that time the temperature was still in the high thirties so everyone waited again until the FFA doctor indicated it was okay to play.

At 8.30 it was still in the low thirties but the sun had set and the wind had a cool breeze from the ocean close by.

Once the match commenced, the Brisbane Roar were firing early as they controlled possession.

Katrina Gorry, as usual, was in the thick of the action while the returning Clare Polkinghorne demonstrated her importance to the side.

Hayley Raso attacked down the wing repeatedly but once again the impressive Monique Ianella had her measure and kept her from launching a tirade of shots.

As has been the theme all season, Melissa Barbieri was the bane of the Brisbane attackers with Gorry and Polkinghorne both having their chances in the first 20 mins but were always stopped short by Barbieri.

Although under constant assault in the first quarter of an hour, the Adelaide defence held up and then it was time for the attack to do their job.

Adelaide had their first real chance of the game after Kristy Moore side stepped two of Brisbane's defenders only for Nadine Angerer prevent it from hitting the back of the net.

In the middle, as was predicted, was a fierce fight for the ball between Lisa Marie Woods and the pocket rocket Gorry. Both players play a similar style of game and it was a pleasure to watch the struggle for midfield supremacy.

For Adelaide it was the midfield who generated most of their forward forays as they lacked intensity up front and didn’t have many opportunities or shots on goals.

Heading into the half time break the scores were tied at 0-0 with the home side the happier side as they took a much need break from the heat of the night.

Ross Aloisi responded to the lack of attacking threats and changed things up at half time as he substituted in Racheal Quigley and Condon just after the half time break.

The result was that it was Adelaide who controlled the match at the resumption of play with a bit more momentum in Adelaide’s forward half.

The pressure was beginning to tell and in the 55th minute of the game, Woods made Angerer work hard for a save as the midfielder rifled her free kick just inches near the top post forcing Angerer to stretch to tip it over the bar.

As you would expect with a team full of Matildas, Brisbane kept pushing Adelaide’s defenders and in the 64th minute, against the run of play, the Roar struck through super sub Emily Gielnik.

Jo Burgess started the move down the wing and crossed it into the path of Gorry but she was stopped short by defender Jenna McCormick.  A hurried Daila Borg clearance saw Gielnik run onto the loose ball and struck it past Barbieri.

Brisbane breathed a little easier and just controlled the ball in the back line and held the ball up.  They still attacked occasionally but the skill of the passing and the intensity seemed to back off a little as they looked to kill off the game.

The Lady Reds however kept searching for the equalizer and in the 84th minute their persistence was rewarded.

Snez Veljanovska caught sight of Quigley's run and played a beautiful long ball forward who just headed on the ball with a little deflection to land at the feet of another super sub Emily Condon.

With the composure beyond her years she has shown all season, the 15 year old slotted it past the FIFA Player of the Year.

At this stage of the game thoughts run through your head, Can the Lady Reds hold on? Will Brisbane take it up another notch?

Brisbane did have their chances later in the game but the ever impressive Barbieri once again stood tall and saved the Lady Reds like she has all season.

When the time came up for the last five minutes of extra time the crowd held their breath. This is where it happens, this is the moment of truth, this is where Adelaide have been unable to hold on in the last couple of rounds.

This time the Lady Reds survived and got the much needed point to keep them above Perth Glory and Western Sydney Wanderers as they close on their best ever W-League season.

They survived the onslaught of Brisbane Roar's Matildas and proved that it is not just luck but determination that keeps them getting points at the end of games.

Brisbane lost the chance in that game to get a home final and will have to now travel to try and win the championship title.

Adelaide will end up higher on the ladder than they ever have in all 6 years of the W-League and with young stars such as McCormick and Condon coming through the ranks it’s only a matter of time that it will be the Lady Reds knocking on the door for the final 4.