Melbourne City were preparing to go home with a slim win on Saturday night...but an upset from Adelaide United left it at 1-1.

The crowd gathered at C. B. Smith witnessed a familiar Melbourne City treatment: plenty of possession, shots, and game smarts but none of the goals to show for it.

The home side were able to break the scoreline with a well-placed penalty from Kyah Simon in the 54th minute.

However, a shock first W-League goal from Georgia Campagnale in the dying moments of the game saw both teams walk away with a point.

City fielded a strong team – arguably the strongest formation possible on paper. This included Elise Kellond-Knight in defensive midfield (KK-as-CB days are well and truly over, it seems) joined by Tameka Butt and Yukari Kinga on the attack.

Simon sat up top as a striker, with Jasmyne Spencer and Rhali Dobson flanking. The speed of the pair saw them outrun Adelaide’s defence again and again. However, a cluttered 18-yard regularly saw the pass in unable to reach key players.

City’s more formidable chances came from working patiently through central channels. However, they faced two obstacles in converting these shots; the first was the goal frame, with Kinga hitting the left post at 29’ and Simon hitting the crossbar at 51’.

The second was goalkeeper Sarah Willacy, who delivered another memorable performance for the Reds.

Adelaide’s game was defined by three key moments: Michelle Heyman’s one-on-one with Williams, Amber Brooks’ foul on Butt, and Campagnale’s equalising goal in the dying moments of the game.

The bulk of Adelaide’s attack came on the counter, with quick distribution from the likes of Emily Condon and Veronica Latsko falling to central striker Heyman.

In the 15th minute, Heyman found the run behind defender Lauren Barnes, resulting in a standoff with Williams. Taking a touch too many, her shot drifted wide of the right goal post.

Whilst the first half produced plenty of opportunities for both sides, Adelaide resumed play with a more conservative approach, sitting deep defensively. 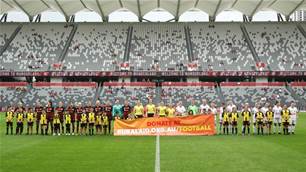