Melbourne City coach Rado Vidosic says the current A-League Women season should be extended by a week to reduce the toll on players who face a banked-up fixture schedule because of COVID-19 postponements.

City are among several clubs to have been hit by coronavirus outbreaks within their squad during the season, which resulted in games being pushed back, and ultimately, played midweek, while some players have also taken time to regain fitness after falling ill.

They will have to back-up quickly against Brisbane on Thursday, when they will once again be without New Zealand duo Rebekah Stott and Hannah Wilkinson due to a lack of international breaks.

Meanwhile Melbourne Victory will have played seven games in 23 days since between February 4 and 26 after they play Canberra United on Tuesday, then Adelaide United on Saturday.

There are two weeks left in the regular season before it is due to roll straight into the three-week finals series, with the grand final scheduled for the weekend of March 25-27.

"We had a few (players who had COVID-19) and to be honest some of them struggled physically. So this was a fantastic test for them but now we have to see how they're going to bounce back," Vidosic said after Sunday's win.

"It's a little bit unfortunate with COVID and so many games now in a short period of time.

"I would suggest to FA (Football Australia) to extend the season for one week and not force us to play in such a short period of time because we are not ready for it.

"COVID has been horrendous, our players are getting injured. It's not healthy for them.

"The wellness of the players should be the number one priority.

"I would suggest that they extend the season and reduce the number of games (in a short space of time) for the players."

While A-League Men teams are also dealing with hectic schedules, it takes a greater toll in A-League Women as many players are semi-professional athletes, dealing with additional commitments like work and study.

Last week, Newcastle Jets reserve goalkeeper Georgia Boric stepped away from the game due to work commitments, while Adelaide star Fiona Worts notably had to back up a five-goal performance against Brisbane with a shift at McDonalds the next day.

Meanwhile the league will also need to rearrange last week's postponed clash between Brisbane and Canberra which was called off due to an unsafe pitch after heavy rain.

A post-round 14 match appears the likely option given neither the Roar nor United will play finals. 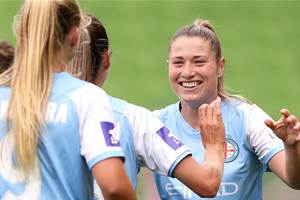 Melbourne City have handed Sydney FC their first loss of the A-League Women season with a 2-1 win but Holly McNamara has suffered a potentially serious knee injury.