Melbourne City have handed Sydney FC their first loss of the A-League Women season with a 2-1 win but Holly McNamara has suffered a potentially serious knee injury.

Melbourne City have beaten leaders Sydney FC 2-1 to charge firmly into the race for the A-League Women premiers plate but will sweat on a potentially serious knee injury to Matildas young gun Holly McNamara.

Kaitlyn Torpey slipped through in-form playmaker Rhianna Pollicina to score the opener in the 13th minute at AAMI Park and scored herself from Tyla-Jay Vlajnic's through-ball on the stroke of half-time.

Princess Ibini scored a 79th minute penalty for the Sky Blues but City held on through a late barrage to hand Sydney their first loss of the season.

Another goal for Rhianna Pollicina!

Her sixth for the season and fourth in her last four @LibFinancial A-League games has @MelbourneCity off to a flyer!

"First half we were very, very good. Second half we just ran out of energy for whatever reason. Maybe just high-intensity training we were doing, maybe that cost us," City coach Rado Vidosic said.

"But it was a little bit disappointing to see how many players were struggling and unfortunately we got one injury.

"It probably would be better to lose the game and not lose the player. So it's a bit disappointing from that point of view."

The game was soured when McNamara went down in tears after a seemingly innocuous incident in the 73rd minute, receiving treatment on her left knee before being helped off the pitch three minutes later.

The 19-year-old overcame a horror injury run, including a ruptured ACL as a 15-year-old, to emerge as one of the ALW's brightest stars and made her Matildas debut at this year's Asian Cup.

"Fingers crossed that it's not that serious but we'll see," Vidosic said, confirming McNamara would have scans.

"She had an ACL three years ago and I think when she felt pain in her knee ... the (internal) movie started going back (to that injury).

"Everyone around her, they know that she had that injury and everyone was a little bit taken aback.

City are now just two points behind the league leaders with a game in hand, while Sydney have taken just one point from their first two games outside NSW after a 2-2 midweek draw with Melbourne Victory.

Charlize Rule put a close-range tap-in over the bar in the 64th minute and Remy Siemsen did the same four minutes later.

Winona Heatley clumsily tackled Siemsen in the 78th minute and Ibini made no mistake with the spot-kick, but Sydney were unable to find an equaliser.

"We weren't at the races the first half. Fatigue or just mentality maybe, we needed a bit of time to get going after Wednesday and obviously the Sunday before that.

"Second half we destroyed them but first half they definitely had the wood on us." 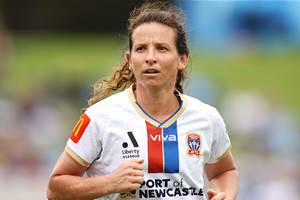 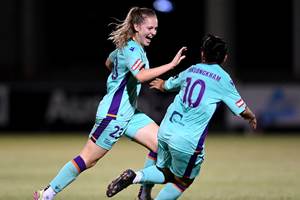