Each week we will take a look at one upcoming A-League Women's game and talk about it's context in the competition and potential as a spectacle. This week's game: Brisbane face Western Sydney Wanderers.

Western Sydney Wanderers have had a week without football, but their last performance was one of their best so far this season in the A-League Women.  Brisbane Roar have broken an unlucky winless streak to with three points away to Melbourne Victory.

More A-League Women news can be found on The Women's Game.

Both of these teams are improving but their season’s remain in the balance. Another loss to either team could damage plans to return to finals contention while a win will continue valuable momentum in a short, unpredictable season.

In the Sydney derby, the Wanderers were defensively disciplined. Malia Steinmetz was excellent in her midfield battle with Sydney’s creators. In defence, Clare Hunt was impassable and 15 year old fullback Alexia Apostolakis played with composure beyond what would be expected,

If there was a fault to the Wanderers game a fortnight ago it is that they did not create many avenues to goal. Byrleeh Henry was their most dangerous player as a spearhead but was also across both flanks trying to create chances. Her energy and defensive work was critical to the result but if Western Sydney are going to score goals they need to find a way to get her the ball in dangerous areas.

Her strike partner Sheridan Gallagher has had encouraging moments since her debut this season but has so far been unable to find the net. The Wanderers need both young guns firing if they are to beat the resurgent Roar.

Brisbane have just the one win so far, but they came two goals down to beat Victory 4-2 last weekend.

Enjoy all the highlights from an amazing afternoon at AAMI Park 💯

Their defense remains vulnerable, particularly when pressed and pressure into errors, but in midfield and attack they have options and a cutting edge.

They have scored seven goals in their last two games. Katrina Gorry was able to receive the ball centrally and use her frightening right foot to bring about Brisbane’s first two goals.

Her first shot bounced off Melissa Maizels in goal for Larissa Crummer to tap in the rebound, while her second was near perfection from long range.

Brisbane also have the in-form Shea Connors who scored her third goal in as many games. While Natalie Tatham made her return from injury to set up the sealer in the closing minutes.

Brisbane scored four goals from four players. They are unpredictable and confident in the final third.

Western Sydney are settled in defence. They have conceded just three goals so far and only league leader Sydney FC have a better record. Brisbane Roar’s 10 goals make them equal second in attack.

This is a balanced game, a strong defensive side in need of goals against a vibrant attacking team yet to record a clean sheet.

There is plenty to look forward to in this encounter and both teams will be going for the win. 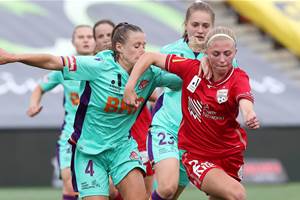 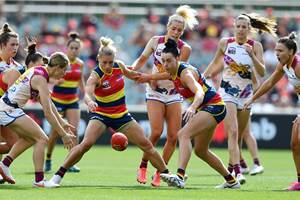 The AFLW kicks off its 2022 season this weekend. The Women's Game has compiled the full list of club rosters, new arrivals and departures, inactive players, captains and coaches.