The American import was named captain ahead of their 2021-22 season.  Morrison joined Victory last season and became vital to the team's success.  The defender played in every single minute of every game of Victory's Championship winning season.

Morrison was then voted the Player's Player of the Year and Victory Medalist in her first year with Melbourne Victory.

Sadly she will not repeat her iron woman feats this year.  Morrison substituted off in the first half of Victory's season opener against Adelaide United after going down injured.  The club then later on in the week that she had torn her anterior cruciate ligament.

Speaking after hearing the news head coach Jeff Hopkins did not hide the devastation of his the loss of his captain:

"Our worst fears were answered today with the news of Kayla's injury and she'll be a massive loss to the squad for the remainder of the season,.

"Everyone at the Club, from the Men's and Women's teams to the administration staff, have showed their support for Kayla and we will do everything we can to help Kayla return to the pitch.

"Lia Privitelli will take the captain's armband on the pitch for the rest of the season but Kayla will still be instrumental to our title defence with her leadership off the pitch..

Updated: Melbourne Victory have further confirmed on December 14 that Morrison has undergone surgery on her knee.  Director of Football John Didulica further discussed Morrison's rehabilitation after her surgery:

"The focus this week is very much on Kayla Morrison who this morning underwent knee reconstruction after having ruptured her ACL in round one.

"Whilst not uncommon in sport it is an injury that disproportionally impacts on women unfortunately.

"So whilst it is the sort of thing that can happen in football, it is quite a large surgery and it will take a multi-disciplinary approach to get Kayla back on the pitch at the earliest possible opportunity.

"So all parts of our human performance team will need to work in cohesion to ensure that she can get back bigger and better leading into next season."

As this type of injury requires a recovery time of six to nine months on average, ruling out Morrison for the remainder of this A-League Women's season. 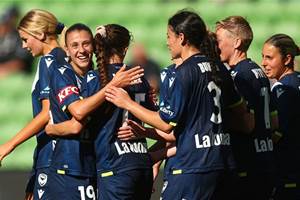 A-League Women, Game To Watch in Round 3