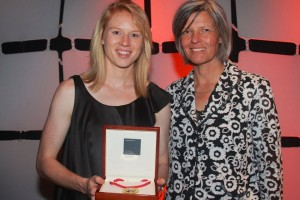 As with last year there have been so many impressive performers on the national and international stage.

Brisbane Roar captain Clare Polkinghorne was rewarded for leading her club to their second premiership with the Julie Dolan Medal for Player of the Year.

Although only 24 years old, the Matildas stalwart was further acknowledged with the Matildas co-captaincy; a title that she has capably risen to as one of the contenders for Matildas Player of the Year.

Alongside Polkinghorne, another close contender for Matildas POTY would her Roar teammate Katrina Gorry.  Accurately nicknamed “Mini”, the diminutive Gorry was a colossus in the Australian midfield as the key playmaker.  Gorry also added goals to her repertoire with a number of stunning strikes at crucial times for the Matildas.

Find more videos like this on Womens Soccer United

For so long one of the wunderkinds Sam Kerr began to fully realise her potential with a mammoth 12 months in Australia and in the United States.  The 20-year-old winger led Sydney FC in goals as she helped them to their second W-League Championship.

She then headed for her first professional stint abroad where she was a regular starter for the Western New York Flash helping them to the regular season title and the Championship decider.  Kerr’s strong 12 months saw awarded the inaugural Football Media Association Player of the Year and the PFA Player of the Year.

Lisa De Vanna (she comes up a bit this year) was another to shine abroad as Sky Blue FC’s lead striker for three quarters of the season.  Unfortunately, as mirrored by her team, injury derailed her progress.  Despite that De Vanna still finished third top scorer for Sky Blue and produced one of THE moments of the year for the NWSL.

Strong performances with the Matildas and in the W-League for Perth Glory saw the 29 year old crowned the FFA Player of the Year for the first time.