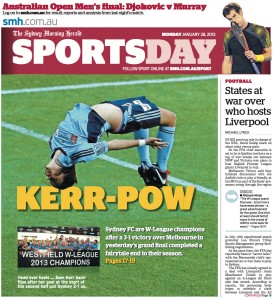 For the first time in the W-League’s history the two bottom seeded semi-finalists won their way to the showcase match with Melbourne Victory hosting Sydney FC.

It was a final that was befitting of the W-League’s fifth season with a fast paced, high-energy game displaying the best of the league at AAMI Stadium.

In the end it was Sydney FC, who had just scraped into the final four, who took out the match 3-1.

There were several highlights including Victory’s Petra Larsson with a stunning free kick on half time and that wonderful Kyah Simon and Sam Kerr combination goal which the latter celebrated in style.

What on earth went through Sam Kerr’s mind as she led the Matildas out in Grenoble?