Former Matildas players always believed they could beat the United States (and they had gone close) but after 27 matches without a win, it was time.

Former Matildas players always believed they could beat the United States (and they had gone close) but after 27 matches without a win, it was time.

The last time Australia met the USA was in Winnipeg at the 2015 Women’s World Cup opening group match. Despite a spirited performance, Australia still came away with a 3-1 loss but they also came away with a team belief that they were on the right path and could mix it with any team in the world.

All that aside now, Australia have joined the sides that have taken down the powerhouse that is the number 1 ranked US Women’s National Team.

Here’s what we learned from Australia’s performance.

If the Matildas believed they could win, the opening ten minutes was not the best advertisement of that belief. As it is with the USA, many teams are beaten before they even enter the pitch - such is the intimidation factor of the most successful team in women's football.

After the US danced around the new look Australian defence early in an array of back heels and nutmegs, the team were able to pull things back with confidence and control - helped by a cracking save from Lydia Williams early.

“I think there’s been a lot of fear over the years but I think we busted that fear at the World Cup to be honest, even though we didn’t win that game the players got a lot of belief out of that game” – Alen Stajcic

In the past where opening domination has left the Matildas behind on the scoreboard, the team weathered the USA onslaught early and the midfield, led by Katrina Gorry and Emily van Egmond slowly began to get on top and were able to win back control of the play.

This likely attests to the growing maturity and experience of the Australian side. Teenager Ellie Carpenter is a case and point. As with several players, Carpenter started out the match shaky with in form USA superstar Megan Rapinoe carving out chances early.

Rapinoe is a master at starting wide and drifting inside and on several occasions the teenager was caught ball watching.  However, the teenager held strong in her defensive role and in the second half truly came into her own and challenged the American defence with several deep runs to feed the ball.

Late in the piece the USA, desperate to find at least an equaliser, brought out some big names to try and make something happen (O’Hara, Dunn, Lloyd, Morgan). While for a time the presence of these players would be daunting, and in the past Australia has not withstood the pressure - or maybe not truly believed - but this time Williams and the defensive unit did the hard work, made the covering tackles and pulled out the big saves. 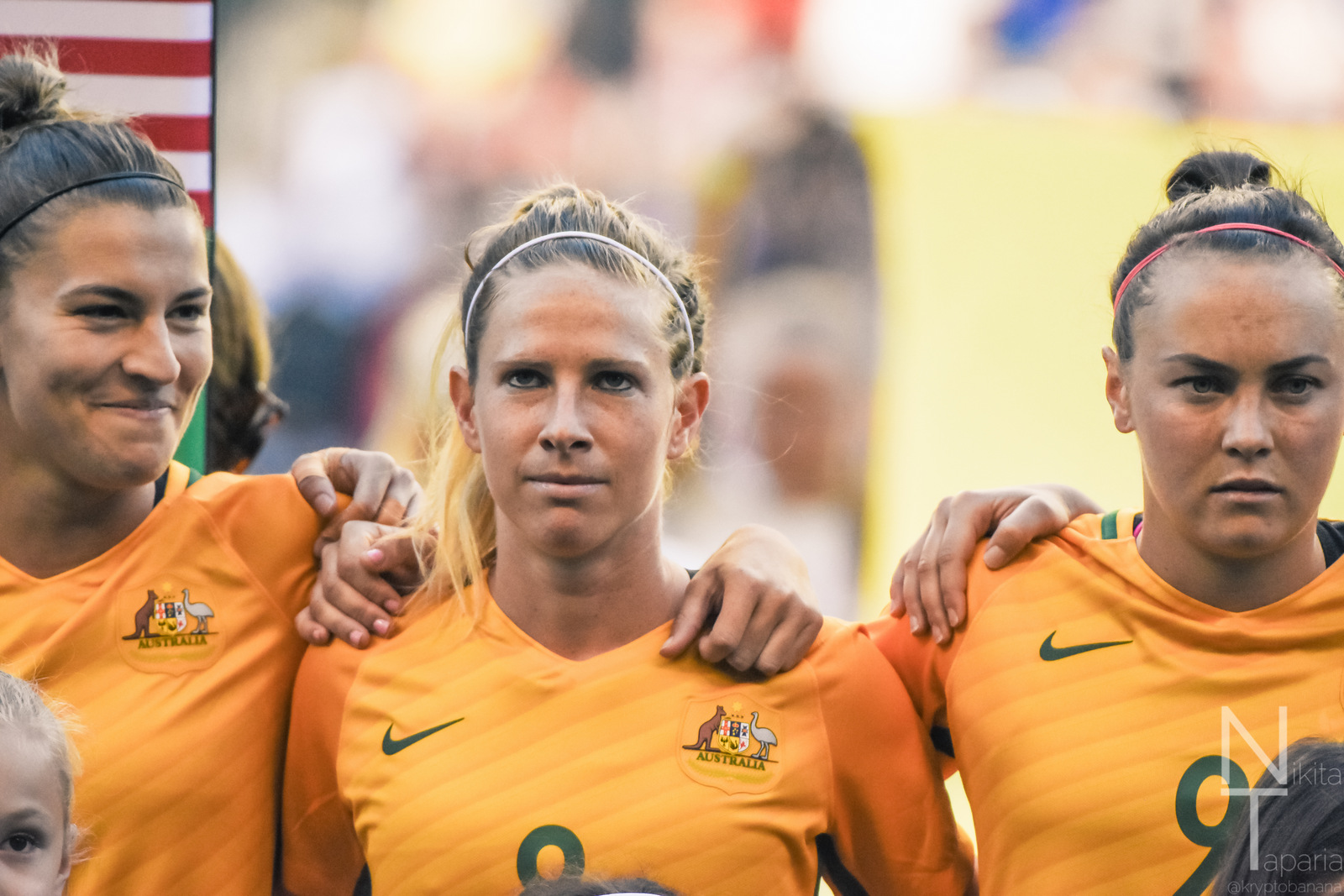 Part of keeping their cool amidst America’s reign early was being patient. While clearing the ball when they needed to, Australia showed promising control between the backline, where the default mode can be to force play upwards.

Kennedy, Catley, Van Egmond and others maintained possession until opportunities presented - most of the time. As in the back, Gorry was impressive in holding the ball until appropriate to release. This patient possession in the midfield meant some promising runs up the wings as players would release wide.

Patience was also key in settling the Australian team after the opening 15 minutes.  The USA loves to play end-to-end football but in denying them the ball, Australia were able to dictate the pace of the game and play it on their terms.

“We found a way to hang in there” – Stajcic

Australia’s four shots on goal is partly due to the team’s decision to push forward when appropriate. While US had misfires from afar, the Matildas’ attempts were often the result of closer combination play.

Like all other elements of Australia’s win, the team’s patience progressed as the game continued – likely unprepared to lose the lead they fought hard to get. Some runs forward did prove unsuccessful for Australia due to poor control, balls presented out of reach or a heavy touch did deny  some forward opportunities. The final third balls were also not as precise in the vital area of the pitch - definitely something to work on for the next game.

3.  Putting on the pressure

After Australia got settled, they pressed the USA hard. At every third of the pitch.

It was a press that the United States found hard to get out of on several occasions.  Australia had the ability to win the ball back after several passes, never really allowing the USA to gain a rhythm in their play.  The midfield led the way but the forwards did their job as well.

While some ball watching across the backline and a couple of messy uncleared opportunities across goal led to some dangerous opportunities for the US (something to work on), by the final third they were mostly shut out and pushing desperate balls from outside the eighteen-yard box.

In that final thirty minutes, the opposing attacking line were pushed for space, boxed in by yellow numbers.

At the opposite end, Sam Kerr and the forwards were relentless. She continually ground the attacking gears for Australia, keeping Becky Sauerbrunn and her backline under constant threat. In fact it was the pressure in the final third that lead to the Australian goal.

Stajcic is clearly utilising this competition as an opportunity to deepen and diversify the squad.

“This year is about building the depth of the squad… rather than relying on the one person as we had in the Olympics and the World Cup before.  Increasing the pool but also increasing the flexibility” – Stajcic

The game showcased players we are used to playing one position playing in another, while the debut of Princess Ibini was a celebration in itself.

Kellond-Knight was moved to left back, whilst Catley play centre back and Van Egmond in a holding midfield role at six. Stajcic is adamant in having one to two solid player options for every position. Having Catley hold that back line with Kennedy showed great promise for the defensive line up.

The absence of other players (including Michelle Heyman and Kyah Simon due to injury) made room for other players in their attacking positions – including Ibini is her very first game (who came on to play the closing minutes of the match). It is worth mentioning that Ibini is the first female player of African descent to represent Australia. She’s also only seventeen.

“It’s a massive achievement for her to make her debut in such a special occasion like this … this is just the first drop in the ocean for her, she’s got a long career ahead of her” – Stajcic

Ibini is one part of a larger building the depth process. Eighteen-year-old Alex Chidiac, also on the squad, is waiting to play this tournament following an impressive season at Adelaide United.  When the squad last played at Algarve Cup, just six players were above the age of twenty-five. 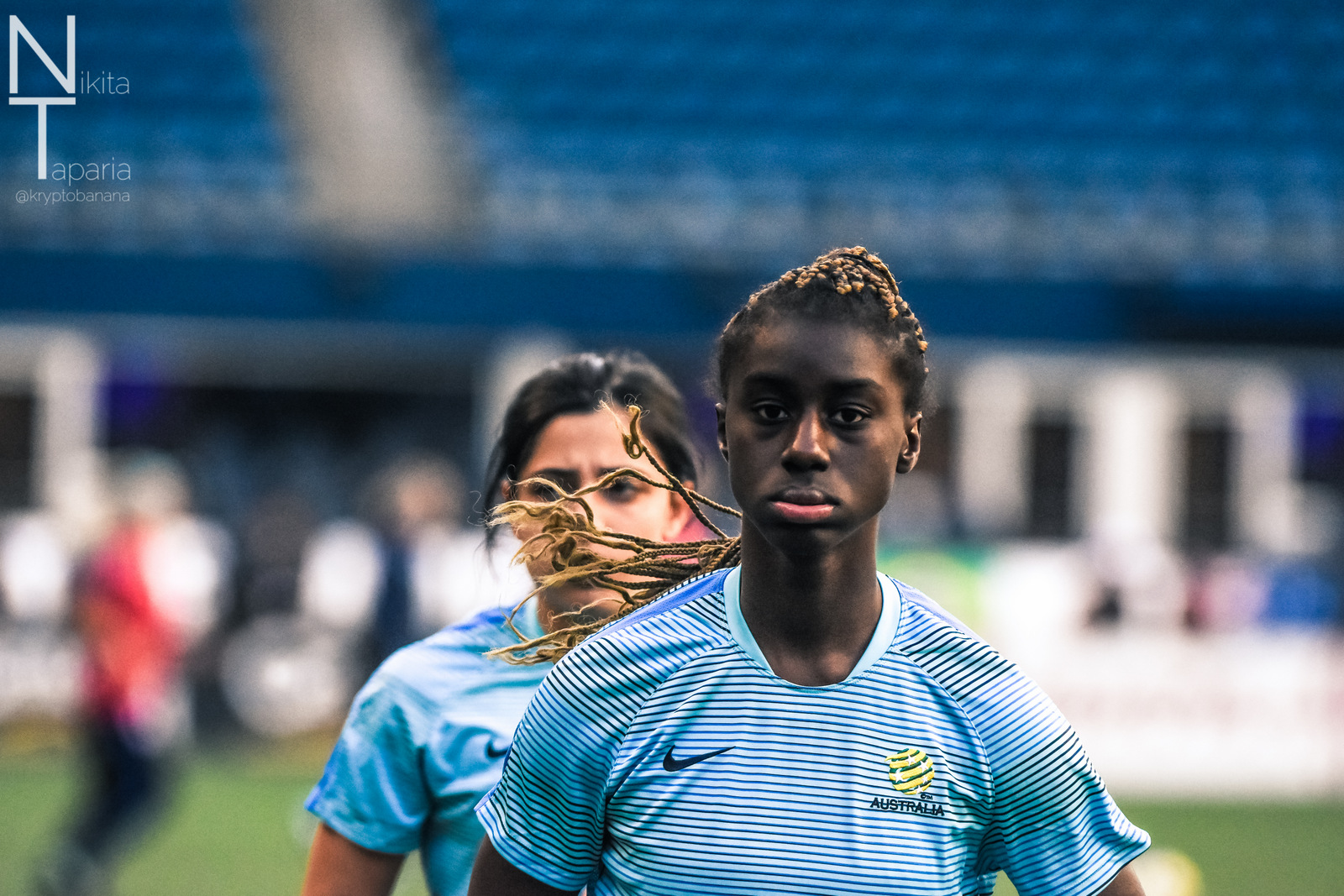 Princess Ibini one of the players at the ToN for experience (Photo: Nikita Taparia)

After a feeling of quiet satisfaction, the next big test will be to keep on performing. We’ve witnessed other teams - including our own flail following a breakthrough victory. With two other top 10 nations to take on back-to-back, can the team maintain consistency throughout the tournament?

“We’ve shown we compete in a one-off, our challenge is to do it every game now” –Stajcic.

While the win is new, the belief isn’t. Under the guidance of Stajcic, the Matildas have been steadily working over the last few years to develop a team that can not only defeat the best but eventually be the best.

It was very special to be here in Seattle to witness and celebrate not only a historic win for the Matildas, but for the women’s game as a whole. Win, lose, or draw  (the night saw all three across the four competing teams), the players and the crowd were excited to be there.

The competition is strong and the spaces between the top teams is narrowing. It is exciting.