The 2017 Tournament of Nations saw Australia claim their first piece of silverware since the 2010 AFC Asian Cup.

The 2017 Tournament of Nations saw Australia claim their first piece of silverware since the 2010 AFC Asian Cup.

While the tournament was an invitational, the calibre of opponent was an opportunity for the Matildas coaching staff and the public to learn more about the squad as the nation builds towards three years of significant tournaments including the Asian Cup (2018), World Cup (2019) and Tokyo 2020 Olympics.

A week on from its conclusion, here are five thoughts on the Matildas and the tournament. 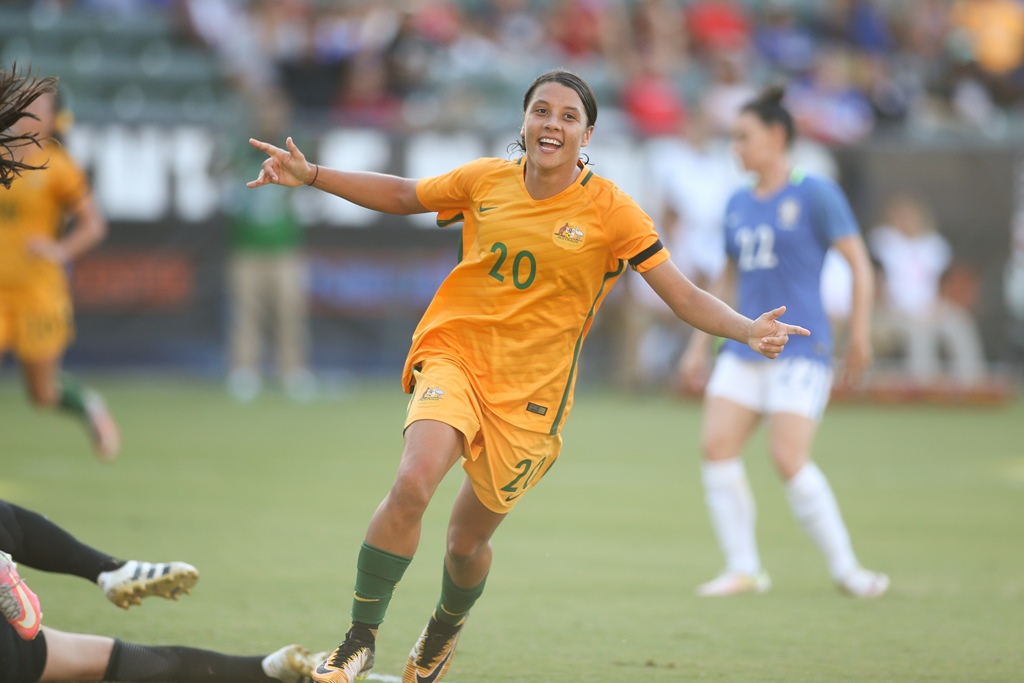 From the commencement of her national team career as a 15 year old, the right wing has been home to Sam Kerr.

While Kerr's pace and dynamism made her a very effective winger, her successful movement at club level to centre forward begged the question; could the same move occur at international level with the same results?

Noting it's a small sample size, the results from the Tournament of Nations were definitely eye catching.  Kerr was impressive not only with her finishing in the match against Japan but in her ability to hold up the ball and bring her teammates into the action.  Four goals and two assists in three games was testament to those abilities.

The advantage with Kerr in the centre forward role is that she can also drift out wide and interchange with Lisa De Vanna and Caitlin Foord as shown against Germany at the Rio Olympics and in the second and third goals against Brazil at ToN.

Moving the 24 year old to the number 9 position also opens up options on the wing with Hayley Raso and Emily Gielnik showing they could comfortably take up that space.

Sam Kerr as the permanent centre forward would pose questions about where to play Kyah Simon and Michelle Heyman who have rotated through that role in the past three years.

It is actually a good problem to have for a nation who, in the early days, were defensively sound but struggled to score consistently.

In the past month some of the best nations in women's football have been on display and what is evident is that Australia has arguably the most explosive attack in the women's game and definitely one of the best with a plethora of choices.  Options like Kerr, De Vanna, Foord, Raso, Gielnik, Tameka Butt and Chloe Logarzo.  Not forgetting the injured Simon and Heyman and W-League Golden Boot winner Ashleigh Sykes - although she is not currently in the national team picture.

It is not just the options but how they are now combining.  From the 2016 Olympic Qualifiers through to the Tournament of Nations, Australia has managed to rotate through a host of players providing the mobility and interchangeability that has given Australia several points of attack. 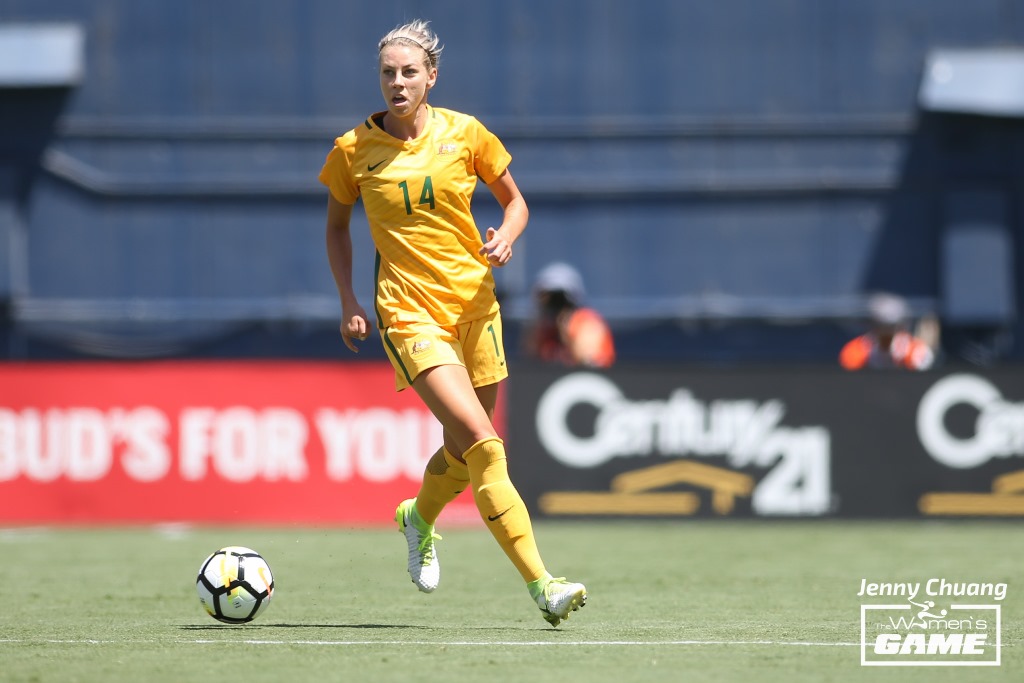 One question mark ahead of the Tournament of Nations was how the defence of Australia would look and how they would hold up against some vibrant attacks.

It was a concern borne out of the fact that several key components of the defence had either not been playing in their regular national team positions or had inconsistent game time since March's Algarve Cup.

In the past 12 months Kennedy has emerged as Australia's key central defender.  Around her a number of different centre back partners have been deployed including Laura Alleway, Clare Polkinghorne, Caitlin Cooper and, during the Tournament of Nations, Steph Catley.

Each pairing has had its own merits and sparked discussion.  For example, Catley's move to partner Kennedy raised the question of whether the 23 year old's attacking attributes were best utilised at centre back or left back where she is considered one of the best full backs in the world.

Catley at left back would give Australia nice balance with the emergence of Ellie Carpenter at right back.  Both players are mobile and attacking minded with the ability to give additional support to an already quick attack.

Exhibit A of why Australia needs to sort out the centre back partnership. Steph Catley at LB is best for everyone. pic.twitter.com/7WDSTDfADJ

This leads us to Carpenter.

The 17 year old continues to stake a claim for the right back position.  After a baptism of fire against one of the most in form players in the world, Megan Rapinoe, the Wanderers full back steadied and seemed to find her feet as the Tournament of Nations progressed.  If her development can continue in attack and defence it would be a nice puzzle piece to slot away.

A final note on the defence was in no. 2 goalkeeper Mackenzie Arnold.  Arnold added two caps against Japan and Brazil to her name during the tournament and generally looks to have moved ahead in the number 2 position. There are number of 'keepers joining the depth conversation including the W-League experienced Casey Dumont, Eliza Campbell, US based Teagan Micah and teenager Jada Whyman. Again it is an area to watch and address.

Slow starts have haunted Australian teams in the past.  Often those early lapses have been punished with goals that have left Matildas teams behind the eight ball.

Slow starts and early goals have impacted Australia's last two major campaigns in the World Cup (against the United States) and in the Rio Olympics (against Canada).

In all three matches at the Tournament of Nations, at some point Australia was under the pump early on.  Against the United States the opening 15 – 20 minutes saw the world champions impose themselves on the game – although they didn't put scoreboard pressure – while against Japan the Matildas conceded a 6th minute goal and a 2nd minute goal against Brazil.

In all three matches, the Matildas withstood the early pressure and turned the game around to ensure that they were played at their tempo and with their rhythm.  It is one of the many signs of maturity and resilience within the playing group.

5. Keeping it in perspective 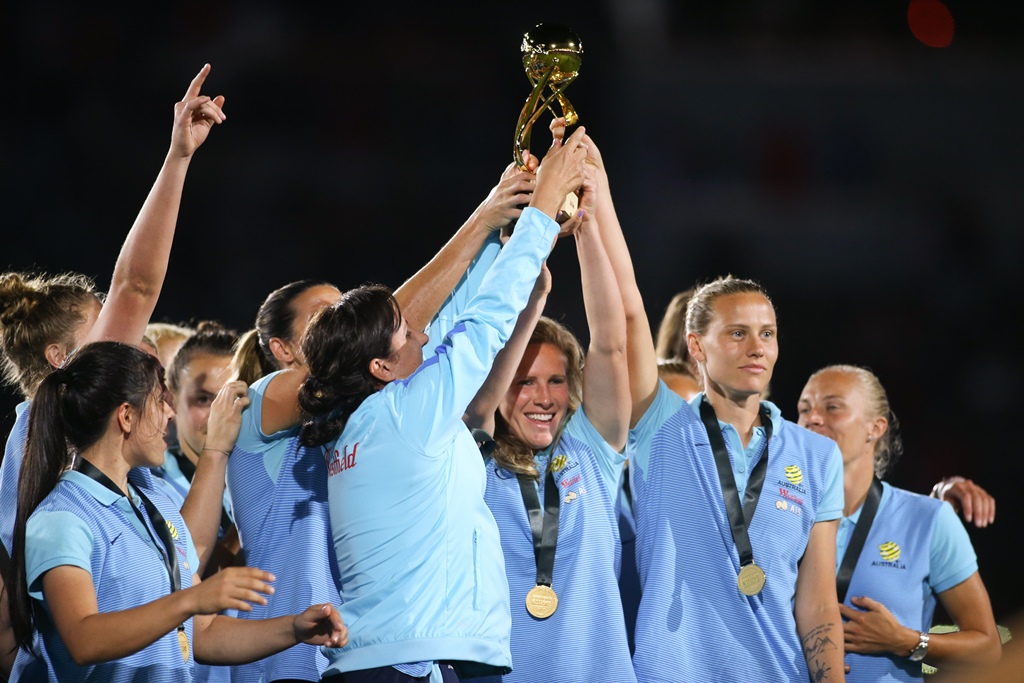 One of the curious reactions to watch post tournament was the "lifting" of the trophy.

Either it had been a while since Australia lifted a trophy that they had forgotten how, or that while winning the Tournament of Nations was a confidence boost, this group of players are aware that there are bigger prizes out there.

Since the Rio Olympics, the Australian national team is entering new territory.  It is territory where the team is rarely now the underdog.  There are expectations to win matches, and they are starting to become part of the conversation when it comes to winning tournaments.

It's been a while since I've been in Australia for a tournament where the Matildas have performed well and it was heartening to see the media support – radio, television and print - for the team.  Apart from some outlets overstating the ToN win – 2010 Asian Cup anyone - there was also a real hum of expectation around the team.

How this expectation is dealt with over the next three years may be one of the factors that determine the heights the Matildas can rise to.

Pressure and expectation does funny things to a talented team – just ask the French national team.