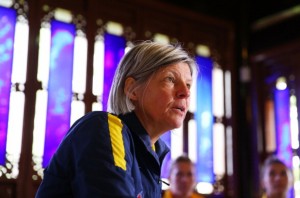 The first anything is always a significant occasion and this year, for the first time, the Matildas were led by a female coach.

de  Reus' appointment came 35 years after the first Australian team was formed in 1978 to participate in the first World Women's Invitational Tournament in Chinese Taipei.

Jim Selby was the coach then and from then to Fred Robbins to Greg Brown and most recently Tom Sermanni, the national team had been exclusively led by male coaches with varying degrees of success.

It's not so much that she is female, as really it should always be about the best candidate available, but because it signals that women in Australian football have access to all sectors from playing to administration and now coaching.

The first year under de Reus has been mixed in terms of results and performance but there have been promising signs with the emergence of several players including Katrina Gorry and the rejuvenation of others.

The big test comes in 2014 as the Matildas look to defend their Asian Cup title.