Despite the score line, both keepers played exceptionally well today.

Mackenzie Arnold kept Brisbane in the game making a number of valuable saves, especially in the first five minutes of the second half where the Wanderers came out firing.

She kept a clean sheet against a team that had scored nine goals in their two previous games, playing confidently and calmly as always.

At the other end of the park, Abby Smith was putting her body on the line for her side.

Even though the Wanderers conceded four goals, the keeper was a vital part of her team today.

She kept Brisbane’s aggressive early attack under control and didn’t concede in the first half despite a high press from her opponents.

You could hear her over the broadcast communicating to the Wanderers players; organising them in defence and encouraging them throughout the game.

Smith got caught off her line a couple of times in the second half, but she didn’t deserve to concede four goals.

Hot DAYUM, Brisbane scoring x2 against the run of play. Smith doesn't really deserve that, but some great strikes from the Roar, so they do deserve the goals.

Strap in cuz the next 30 minutes are going to be huge. #WSWvBRI 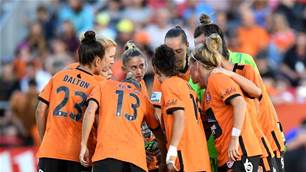