Only one team could come out of today’s game undefeated and it was the hard-hitting, fast paced Fremantle Dockers who charged home by 18 points over an impressive and gallant Lions side at Fremantle Oval.

Starting with a bang, Wardlaw was quickly off the mark with her side’s first goal of the match and set a high standard for both sides to match throughout the game.

But what is more impressive, is that the 185cm forward is versatile on the ground. Not only did she prove that she is hard to match in the air, Wardlaw has also been strong when the ball hits the turf. The ability to crumb the ball once it’s on the ground is a skill that not many of her height can conjure up each week.

Despite their loss today, Wardlaw has justified why she could very well be the next Tayla Harris, with a modern spin on the key forward role.

She now leads the competition’s goal-kicking leaderboard, alongside North Melbourne’s Kait Ashmore (both with eight majors to their names) and will look to hold her position there for the rest of the season to help the Lions come finals. 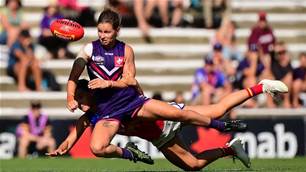