FIFA has begun the process of vetting the 12 possible Australian and New Zealand host cities for the Matildas and Football Ferns' 2023 Women's World Cup on home soil.

Virtual workshops between FIFA and the 12 candidate cities will take place from 20 October to 4 November, which will involve each candidate city presenting their hosting plan to FIFA, FFA and NZF.

It will also be a lengthy process whereby each state government and council involved will be able to properly flesh out the hosting requirements and start a formal working relationship with all three associations.

The 12 candidate cities that will take part in the virtual workshops are:

Sydney will have two stadiums in the running to host matches, Stadium Australia and Sydney Football Stadium, with BankWest Stadium not selected at this stage.

With a record 32 nations competing, there is more scope than ever for smaller candidate cities to be chosen. FIFA representatives will then personally visit each city and stadium when COVID19 restrictions allow them to.

“We look forward to the virtual workshops over the coming weeks as we take our first steps together with Australia and New Zealand towards the FIFA Women’s World Cup 2023.

"These workshops will provide a useful forum to learn more about the 12 candidate cities, such as their plans for stadia, training sites and other key operational areas.”

View the originally proposed host cities, stadiums and dates below: 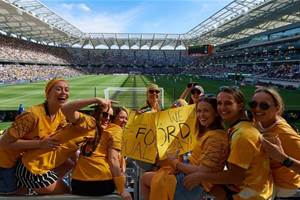 Here is our updated list of the most recent information regarding host cities, stadiums and proposed dates for the Australian and New Zealand 2023 Women's World Cup.

Aussie midfielder signs for Everton: 'The best player that I can be'