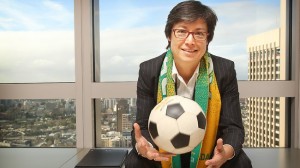 Hands up who wants to be Moya Dodd when they grow up?  In 2013 the former Matildas vice captain went places few Australians have been before; let alone women.

Already a FFA Board member and AFC Vice President, Dodd was co-opted onto the FIFA Executive Committee becoming only the third woman and first Australian to sit at FIFA’s top table.

That she has done so has been a real boon for women in football.  Not just the players but for those who are disadvantaged regarding access to the game and those aspiring to football administration from all over the world.

Following on from her campaign to overturn the ban on the hijab, Dodd has spoken out against the ban of women at football matches in other parts of the world as well as been a key member of the FIFA Women’s Football Committee and legal committee.

There is still plenty to be done but having women like Moya in the right places is an encouraging start.