The Australian Rugby Sevens team are heading to the Sydney Cup final after defeating Russia 24-0 this afternoon.

Often the semi-finals in a Sevens tournament is a delicate balance between fielding your best 7 and protecting and conserving them for a potential final a few hours later.

But, here in Sydney, with the three-day event, Tim Walsh was able to set the field like it was a final.

The Russians have improved impressively since last season, wherein Sydney they placed seventh.

Following on from a bronze placing in Dubai, they’ve looked strong this weekend and dominated the United States in their quarterfinal.

The close of the first half had some heat in it after Evania Pelite copped a boot to the head courtesy of Russia captain Alena Mikhaltsova.

The home side lifted as one, determined both to keep Russia from scoring – with Pelite charging down Mikhaltsova on a run out wide, and looking for a greater cushion.

The second half saw a few handling errors from the Australians, but their defence was flawless, as wave after wave of Russian pressure was absorbed.

Charlotte Caslick raced away with another quick restart try to almost seal the game up with three and a half minutes to go.

Cassie Staples scored late, pairing nicely with Emma Sykes down the short side – but it was a mostly unchanged side grinding through the match.

They defended right to the last, with Quirk finding an intercept final play try to underline another dominating win.

"It’s a first for us playing the third day with just the final," she said.

"But we will do the exact same thing like we normally do and prep like it’s a day two final, just go home recover get as much sleep as we can and fix all the bumps and bruises and be ready to fire tomorrow."

Australia will play rivals New Zeland in the final at 2:37pm AEDT on Sunday. 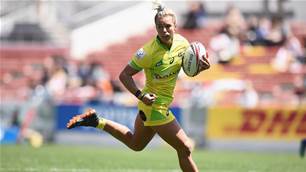