Casey Dumont was elated with her own stunning performance and the "individual brilliance" shown by Melbourne Victory's key stars in their 3-2 win against Brisbane Roar.

CHECK OUT ALL THE HIGHLIGHTS IN OUR GALLERY ABOVE

Dumont made a string of crucial saves at her near-post, including some phenomenal double efforts, to help Melbourne hold on to a narrow 3-2 win over their title rivals.

Brisbane got off to the worst possible start after Kaitlyn Torpey's horror own goal, which was then sealed by two clinical Natasha Dowie efforts.

"I'm not going to say personally, but as a team, it's almost entirely a different team that came out today than last week," Dumont beamed.

"As a team today we really showed what we're capable of, individual brilliance as well like Dowie's goal and...a couple of my saves, that really made the difference tonight.

"Well that's what I should have done last week! But I made up for it this week and I did my job for the team."

Brisbane struck back through a brilliant Tameka Yallop team goal, but when Dumont saved Yallop's penalty towards the end of the first half, momentum swung back in Victory's favour.

An Indiah Paige-Riley effort on the 80th minute made the final proceedings exciting for Brisbane's first home match of the season, but merely proved a consolation.

Victory now go into their AFC Club Championships on a high and Dumont is looking forward to the challenge.

"I know Meeks, I know she goes that way, but I love penalties, I love being able to stand up against a striker, and you get a bit of luck sometimes as well," Dumont ribbed.

"It's sort of lucky in an aspect because we get to take on really tough teams and come back even fitter. It's amazing that we get to play Champions League teams for once." 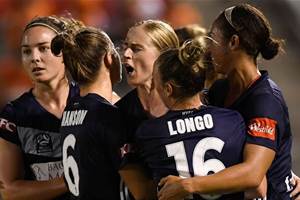 Melbourne Victory bounce back from last week's poor performance while Brisbane Roar struggle with their own first game jitters. 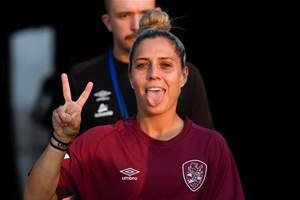