The Young Matildas have failed to qualify for the Under-20 Women's World Cup after they were hammered 9-1 by South Korea at the Asian Under-19 Championship.

With a spot in next year's World Cup on the line in Saturday's third-place playoff in Thailand, the Australians were no match for the Koreans.

Trailing 3-0 at halftime, the only bright spark for the Young Matildas was Mary Fowler's goal on 81 minutes to reduce the deficit to 5-1.

It was 16-year-old Fowler's fourth goal of the competition, to finish equal third in the Golden Boot standings.

The Young Matildas finished fourth at the continental tournament in Thailand - their joint best finish in the past 12 years at the youth football showcase - after they slumped to their second heavy defeat in as many games.

Only once have they performed better with a third-place finish in 2006.

Earlier in the week Australia were hammered 7-0 by Japan in the semi-finals.

The Japanese accounted for North Korea 2-1 in the final with both teams, and South Korea, advancing to the 16-team World Cup in Nigeria as Asia's three representatives. 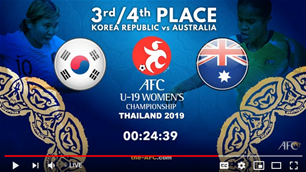