The Young Matildas have been beaten 7-0 by Japan in the semi-finals of the AFC under-19 championships in Thailand.

The Young Matildas have been humbled 7-0 by an impressive Japan in the semi-finals of the AFC Under-19 Championships in Thailand.

Coach Leah Blayney's team went into the match knowing victory would earn them an automatic spot in the FIFA U-20 Women's World Cup in Nigeria next year.

However the Australians were stunned by a fired-up Blue Samurai outfit who raced to a 2-0 lead after 23 minutes and then added three quickfire goals six minutes after halftime.

The match in Chonburi was played in stifling humidity and the Young Matildas simply had no answer to the mobility and superior fitness of Japan who cut through at will, scoring two more goals in the final 10 minutes to seal an emphatic victory.

Blayney must now lift her team for the third place playoff match against South Korea in Chonburi on Saturday (4pm AEDT), where the winner will also secure a spot at the World Cup.

"Credit where credit is due, it was an excellent performance by Japan," Blayney said.

"We knew going into the game that we were playing a world champion team and that it was always going to be a tough challenge.

"Early on, in the first 20 to 25 minutes, I thought we were in a good position until we conceded a penalty and two goals in quick succession.

"Obviously there is another game left for us in order to qualify for a FIFA World Cup which we will be looking forward to." 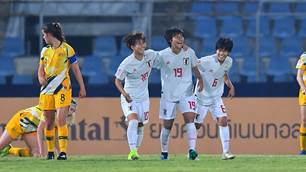