The Young Matildas have opened their second stage of AFC U19 Women's Championship qualification with an 11-1 win.

Ahead of the match, coach Garry van Egmond spoke to Eleven Broadcasting about coming up against Nepal, Uzbekistan and Myanmar.

"We've been preparing a lot for this tournament," he said.

"We respect all of our opponents obviously with Myanmar being the host the nation, they are always difficult to beat but we look forward to each game and they will each bring their own challenges."

Australia opened the scoring against Nepal within the first four minutes of the match through forward Mary Fowler.

It didn't take long for Fowler to add a second while Susan Phonsongkham scored the third.

Speed was going to be Australia's strength in this game and they used it to their advantage with quick runs down the wings or blistering runs through the Nepalese defence.

Fowler had a hat-trick inside 15 minutes and it seemed destined that it was going to be a big scoreline. However, it would take another 14 minutes before Australia hit the back of the net again.

In the meantime, the Young Matildas had their chances with Fowler and Princess Ibini leading the way but nothing would come to fruition.

Nepal played with fire when they took passes back to the goalkeeper with a speedy Australian attack on their tails.

The 39-degree day in Mandalay was having an effect on both teams but Australia pushed on for their fifth goals and Fowlers fourth before MJ Barbieri scored after the goalkeeper parried the ball back into her path.

While the Nepalese conceded six in the first half, their goalkeeper did save them from it going any higher with some crucial saves.

Despite only having one clear cut chance in the first half, Nepal was able to get on the board with a goal through Manjali Kumari Yonjan just before the break.

The second half was much like the first with the Young Matildas dominating the run of play.

Fowler, Rachel Lowe, Kyra Cooney-Cross, Indiah-Paige Riley and Shay Evans all added goals throughout the half.

Australia will face Myanmar on Sunday (April 28) at 9:30pm AEST. 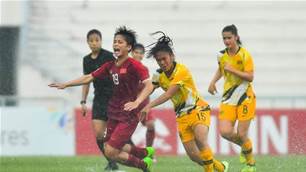 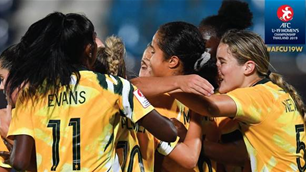