Young Matildas are within reach of securing their place in the AFC U19 Women's Championships with a 3-1 win over Myanmar.

Australia are the only team in Group A to have two wins under their belts with a match against Uzbekistan their last for this round.

It was a tough match against Myanmar with the home side proving to be quite the challenge for the Young Matildas.

Myanmar was able to put the Australian defence under pressure from the whistle but they were able to scramble to get the ball out of trouble while the goal was in safe hands with Annie Grove between the sticks.

The Young Matildas also had their chances but the Myanmar goalkeeper was fearless and the defenders were able to cut out Australian passes to the forward line.

It was a vocal crowd in Mandalay which was pushing the home side on for a goal, however, Myanmar's finishing touch was lacking.

Their closest chance came in the 37th minute when a shot just skimmed past the post after an electrifying run.

Just a minute later Australia had a chance from distance but it also skimmed the side netting.

However, the persistence in attack from the Young Matildas paid off when just seconds before halftime Princess Ibini ran onto an overhead pass to give Australia the lead.

After the break, Mary Fowler, who scored her sixth goal in 106 minutes, doubled Australia's lead with a well-placed ball in the bottom corner.

Not long after, the home side struck back.

The rest of the match played out pretty evenly between the two sides with just a stunning free-kick from Chelsea Blissett evading everyone in the box to ensure Australia got the three points.

The Young Matildas now face Uzbekistan who eliminated Nepal in the earlier game on Sunday with a 4-0 win.

The central Asian nation still has the chance to qualify for the final round if they can get a win over Australia. 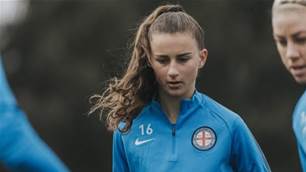