The 26-year-old was controversially denied a goal by an offside call in Adelaide's 1-0 loss to Perth on Thursday, but that sense of injustice fuelled Worts and her teammates as they took a giant step towards a maiden A-League finals appearance with the win.

Worts' haul, which takes her season tally to nine, matches Melbourne City's Hannah Wilkinson and former Matilda Kate Gill as the most goals by a single player in one game in league history.

As well as Worts, Chelsea Dawber, Matilda McNamara and an own goal by Roar defender Hollie Palmer completed the scoring for the visitors.

American Shea Connors scored a second-half double for the Roar but her strikes were small consolation for the home team.

Combined with Perth's 4-0 loss to Melbourne City, Adelaide are now three points clear of the Glory in fourth place with three matches to play in the regular season.

"I had to make sure that none of them were going to get disallowed and make up for some lost goals I think today," Worts told the Australian Associated Press.

"We have to kind of prove that we deserve to be up there.

"We obviously needed the points and yeah, just wanted to creep that goal difference as well up a bit.

"Once we got going and we put two or three in, definitely wanted to keep going to see how many we could put away."

The loss is the heaviest defeat in Brisbane's ALW history and also the first time the Roar have conceded more than six goals in a league match.

"I was really disappointed in the way we defended. It's unacceptable," Roar coach Garrath McPherson said.

"Some of the one v one defending, the way we were dealing with some of their crosses, early balls behind, just wasn't good enough.

"They were very good, clinical and took their chances well but we've got a lot of work to do defensively."

To add injury to the insult, Brisbane lost goalkeeper Mia Bailey midway through the second half after she went down with a leg injury, meaning 18-year-old Isabella Shuttleworth made her ALW debut off the bench.

McPherson confirmed after the match Bailey had been taken to hospital and was in significant pain.

"They had her on some painkillers straightaway ... that amount of pain, that's not normal," McPherson said.

"They were a little bit worried about the impact and what might be going on in there."

Adelaide will look to consolidate their position on Thursday when they take on bottom-placed Wellington while Brisbane host Canberra on Friday aiming to salvage some pride. 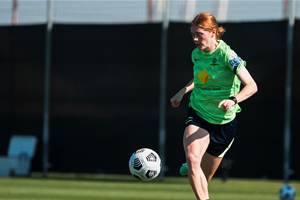