Extending their winning streak to five, Adelaide won every quarter in a commanding performance to inch closer towards third spot on the ladder.

The Caps received strong performances off the bench from Marianna Tolo and Leilani Mitchell but the team struggled with the Lightning’s pressure, turning the ball over 21 times.

Playing without Suzy Batkovic, on a two-game losing streak and in danger of falling out of the playoff race, Townsville were at their best on Friday night.

The reigning Champions dismantled the Lynx with a 52-29 opening half as Ally Malott shone in Batkovic’s absence and Tess Madgen top-scored with 20 points.

Capping off a stunning night, Alex Fowler scored her first points in the league as both sides cleared their benches down the stretch.

Both teams were coming off confidence-boosting upsets but the Flames crashed back to Earth quickly as the Rangers made quick work of them.

Dandenong led by nine at halftime before putting together a 56-32 second half as they shot 57% from the field overall, out-scored Sydney by 27 from beyond the arc and finished with a 15-5 edge in fast break points.

Bec Cole was unstoppable with 31 points on 12-14 shooting and five steals while every Rangers starter scored 12+.

Keeping their momentum going, the Rangers claimed another huge win to race into a top-four on the back of a third consecutive victory. They blew Bendigo out of the water with a 30-14 opening term and led by as much as 28.

Dandenong tallied 30 assists as a team and also welcomed back Sara Blicavs for her first game in over a year following ACL surgery.

Nat Hurst paced the Spirit with 15 points but they now find themselves on a six-game losing streak.

Trailing for almost the entire first three quarters, the Boomers put together a 30-19 final term to come from behind and end Adelaide’s winning streak.

Maddie Garrick was the spark with three three-pointers in the fourth quarter as the home side then put together several impressive defensive sequences to shut down the Lightning.

Kayla Alexander and Nia Coffey almost got Adelaide over the line but the efforts of Lindsay Allen and Ezi Magbegor helped move the Boomers to the top of the ladder.

Despite this being a battle between first and third on the ladder, both sides were coming off defeats into the game.

The Caps blitzed their opponents with a 30-10 first quarter.

Leilani Mitchell set the tone and while Asia Taylor and Alison Schwagmeyer were able to fight back with a combined 28 points, the damage had been done.

Kelsey Griffin and Marianna Tolo then put the icing on the cake to hand the Lynx their third-straight defeat and drop them to second spot on the ladder. 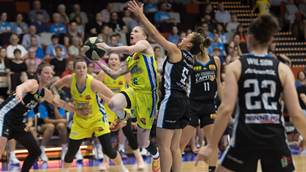 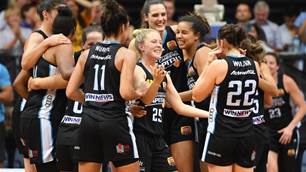