Matildas goalkeeper Williams is the most recent benefactor of Montemurro and Aaron D'Antino's era at Arsenal, joining Steph Catley and Caitlin Foord at the club.

Williams is one of Montemurro's Melbourne City's invincibles and now joins the Gunners with the view of replicating both City's W-League success, and the invincibility of Arsenal's legendary men's side, when the Women's Super League season resumes.

"At Melbourne City I worked with Joe [Montemurro] the second season he was there," Williams told The Age. "I always wanted to go to Europe as the next step.

"Obviously seeing what he did [winning the WSL in 2018-19] I was immensely jealous and when the opportunity came to be a part of it I jumped at the chance.

"And playing with Caitlin [Foord] at club level, which I don’t think we’ve done yet, is another reason I am pumped to be at Arsenal.

"I am always excited for whatever club I play for, it's always an honour ... but it's kind of crazy because you watch these teams in the English Premier League as a young kid and now there's an opportunity to represent a club that you grew up watching. It feels pretty surreal."

While a series of European doors have been flung open for the Matildas, W-League doors also close. The advantage the Australian national side stands to benefit is numerous however.

While the Matildas' departures open up numerous opportunities for younger female players to make their mark, it also means Australia's best football talent will be matching it with the European elite.

But as Williams offered her insight, a grounding overseas has innumerable personal benefits for a squad often rendered lethargic by intense travelling schedules as well.

"I love coming home and playing in the W-League," she said.

"But to be able to be based in one place for one club is just going to be an absolute heaven-sent opportunity.

"You have to change styles of play between clubs, be comfortable with travel and this will be the first time I will have a pre-season in six years.

"It is different, but not in a bad way. I just want to be in one spot playing at one club." 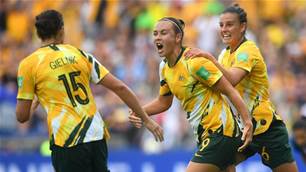 Foord interested in 'firies, army or police force' after football