Matildas superstar Sam Kerr reveals why she knocked back offers to play in Europe and instead returned home to play for Perth Glory in the W-League.

There is no argument that Sam Kerr is one of, if not the best female footballer on the planet right now.

As the reigning Asian, W-League and US National Women's Soccer League player of the year it’s hard to raise any objections.

Snubbed by FIFA and being left out of FIFPro Women's World XI, Kerr may finally be recognised on the global stage after being shortlisted for the inaugural women's Ballon d'Or.

But being one of the most in demand footballers in the world isn’t without its challenges as Kerr revealed when tasked with determining her playing future.

“It was a real stressful time to be honest,” Kerr said. “Europe was the main one - I was talking to a few clubs.

“Every footballer wants to play in Europe. It’s where football was made and everyone loves it. I definitely want to go over there and show the Europeans how the Aussies do it.

“I will eventually get out there but whether it’s next year, whether it’s two years, I don’t know. You never know I could be at Glory for another year. It’s so up and down football.”

Kerr revealed she chose to snub Europe and play in Perth because she wanted to be in the best shape possible leading into France 2019.

“At the end of the day the World Cup is the most important thing,” she said.

“I’m really comfortable at home. I always play well for Glory so hopefully I can stay fit and healthy and get in the World Cup team.”

The striker heads into the W-League after scoring 16 goals in 19 games for the Chicago Red Stars to win the NASL golden boot for the second consecutive season.

Kerr also topped the W-League scoring charts last term but the 25-year-old wasn’t making any promises that she would be doing it again this campaign.

“I never put a number on how many goals I want to score. I just want to have the biggest impact on the team,” she said.

“Hopefully the goals come but I don’t think about things like that.”

After scoring for club and country on a regular basis the Matildas striker has put her consistency down to having found happiness away from football.

“Honestly I just really started to take care of myself,” she said.

“I know my routine now, I know what makes me happy. My personal life off the field is much more important than playing well on the field.

“If I’m happy off the field then I play well. So honestly, I think I found a balance with football and my personal life and it’s helped.” 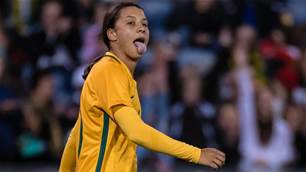 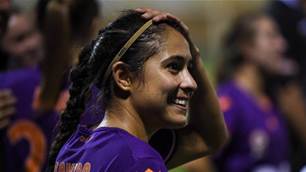