The 2019-20 season was Cooney-Cross' third W-League season. Making the move from the Melbourne Victory to the Wanderers this past season paid off for the 18-year-old. Cooney-Cross featured in all Wanderers matches scoring four goals in thirteen games. She won the November W-League Young Player of the Month.

The Westfield Matildas regular joined City on loan from her NWSL side the Portland Thorns FC. Her first year with the Melbourne side, having previously played two years with Canberra and two years with the Wanderers, Carpenter featured in all 14 games of City's Grand Final winning season. Carpenter won the January W-League Young Player of the Month.

The 2019-20 season was Palmer's third year with the Roar. The 19-year-old defender played in all 12 games for the club. The Young Matilda scored two goals for the Roar this past season. Palmer won the February W-League Young Player of the Month.

Riley rejoined the Roar for her second season in the W-League. Featuring in ten of the club's 2019-20 games, she found the back of the net twice. She had a 75% pass accuracies in her first seven appearances. Riley won the December W-League Young Player of the Month.

One of our stars of the future Indiah-Paige Riley shares what Rebel Sport Female Football Week means to her! 🌟 pic.twitter.com/LiJPEtuqEY

Voting is open until June 18, 2020. You can submit your choice by clicking here. 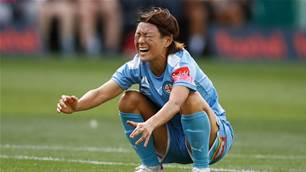