The Junior Matildas have scraped through to their first AFC U16 Championship semifinal in a decade with a 2-2 draw against Bangladesh.

Despite suffering a shellacking in their first match, the Bangladeshis were more than a match for Australia and took the lead early through a perfect counter-attacking move from Tohura Khatun.

Khatun was a huge problem for the Australians throughout as the Junior's defence proved especially susceptible to Bangladesh's quick passing and agile movement.

But Australia's possession-style kept their opponents penned back and the Tillies went close several times before Claudia Mihocic's header from close range finally broke the deadlock on the 77th minute.

With the deadlock broke, the floodgates opened. Tough, humid conditions in Thailand had worn both teams down and no sooner had Australia won some relief than Khatun had broke their hearts again, another quick-counter seeing her easily sprint through the Australian backline and score the go-ahead within a minute.

Unfortunately for Bangladesh, that wasn't the end of it. Paige Zois was determined to give the Bangladeshis a taste of their own medicine and two minutes later rifled off the final goal from range, finally beating the tough Bangladeshi goalkeeper, Rupna Chakma, who was steady throughout.

The draw sees Australia go through to their first semi-final in nearly a decade, where they'll almost certainly be facing North Korea. 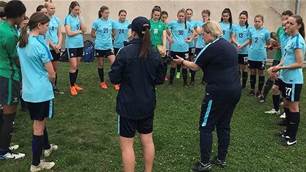