The match is part of a Sydney derby double header, with women’s game played after the men’s derby, the first time this has ever happened.

“Saturday can’t come quick enough, we will be ready for them,” said Heffernan, who’s young team lost 3-0 to the Sky Blues in the season opener two weeks ago.
“Round One against Sydney didn’t hurt our confidence at all because we know the type of football that we are capable of.”
The Wanderers bounced back from their opening round defeat, beating Newcastle 2-1 last weekend with a double from Rosie Galea and an outstanding performance from goalkeeper Courtney Newbon (seven saves).
Heffernan admits he has been impressed with how the youngsters have improved as the season has gone on, with the likes of Newbon, Margaux Chauvet, Chloe Middleton and Danika Matos all starting the season well.
“In the eight weeks we’ve been together I’ve seen some of the best passages of play since I took the job.
“All top girls who work hard as well. They’re developing quickly into the team we want to be. They’re a brilliant bunch of girls.
“The challenge now is to do it on a consistent basis, and I have no doubt we have the mentality to do so.”
Heffernan paid tribute to the veterans in the team, giving special mention to former Matilda Leena Khamis, who was outstanding in the win over the Jets.
“Leena is one of the best professionals I’ve ever worked with and/or played with.
“We have a few characters in there which always helps, and the experienced girls have been excellent for the younger players.
“And to be fair the young girls have been excellent for the experienced girls as well. We are lucky to have a very enthusiastic and motivated group of players.”
Sydney FC also beat Newcastle 2-1 last Friday to set up an intriguing battle next weekend. Heffernan was full of praise for his team’s local rivals but insisted his team won’t be overawed by the occasion.
“Sydney are a good side, they have been together a long time and are well coached. Always make good adjustments when needed.
“We just have to focus on ourselves and how we want to play football by sticking to our principles of play.”
Kick-off is at 7.40pm next Saturday night at ANZ Stadium. The men’s A-League game kicks off at 5.05pm. 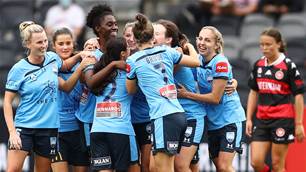