The Renegades have won four on the trot, but the Sixers and Thunder remain the team to beat as the WBBL enters the home stretch.

It was a record-breaking day for Sixers’ skipper Ellyse Perry, who continued the most dominant WBBL season ever seen.

Her innings off 80 off 54 not out set up the match for the Sixers, but also saw her pass 50 for the sixth time this season – a feat never before achieved. To add to this, she also eclipsed Meg Lanning’s mark for most runs in a WBBL season, which was previously 560 in WBBL01. Perry currently has 617 runs with four matches to go. Healy and Gardner played handy supporting roles, and both passed 40.

Perry wasn’t done. She took new ball, got Amy Jones out in the second over of the match and backed it up by clean bowling Heather Graham for a golden duck. Perry’s captaincy was fantastic too, she was aggressive with her two strike bowlers (Marizanne Kapp and herself), with both opening bowlers bowling three overs in the PowerPlay.

5️⃣0️⃣ for @EllysePerry and what a way to bring it up! 💪

As if she hadn’t done enough, Perry’s golden day continued when she dismissed Lauren Ebsary with a direct hit run out.

A defiant knock by Aussie skipper Meg Lanning – a knock that felt somewhat like an answer to Perry’s incredible form – kept the Scorchers in the game, but she had little help, with Mathilda Carmichael second top scoring with 19.

It was a see-sawing, low scoring affair at Bankstown Oval, but Nicola Carey stamped herself as a world-class player.

The Thunder’s innings went slowly, with all of the top order struggling. Naomi Stalenberg made 21 but it took 30 balls, and after fifteen overs the Thunder had just 74 runs on the board.

When Carey and Rachel Trenaman came together, the Thunder’s innings shifted gears, with Carey dominating the bowlers on her way to 39 off 32 not out. After a slow start, Trenaman showed some signs and struck two boundaries. The Thunder ended up scoring 25 runs off the last two overs, which proved crucial in the end.

The Stars have been heavily reliant on their openers all season, and when they struggled in this innings, the Thunder took control. Lizelle Lee scored slowly and was dismissed as soon as Maisy Gibson was introduced into the attack.

This was never more prevalent than this match, with Sydney’s number seven top scoring for the match, and Melbourne’s numbers four through eleven combining for just 35 runs. 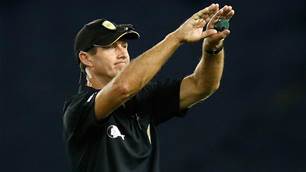