The WBBL is well and truly underway after eight matches were completed over the weekend.

The round kicked off on Friday night when the Scorchers met the Sixers at North Sydney Oval.

The Scorchers were dealt an early blow when teams were announced, with skipper Meg Lanning out with a back issue.

English import Amy Jones replaced her at top of the order, fresh off of a fantastic T20 World Cup, and filled in brilliantly, bringing up her half-century off just 25 deliveries. Elyse Villani provided some solid foil at the top of the order, with the openers sharing a 77-run stand.

When Villani was dismissed in the eighth over, the Scorchers looked on track for 180 or more, but an attacking spell of middle-innings bowling from Dane van Niekerk halted Perth’s momentum.

Perth’s middle and lower order will need to stand up if they’re going to cause damage in this competition, and they failed on Friday with batters four through eight combining for just 34 runs off 33 balls when their team needed to accelerate.

The match belonged to Ellyse Perry though, who scored a fantastic century to guide her team home.

Van Niekerk rounded out a solid match by playing some conventional cricket shots to steady the innings and provide a handy partner for Perry.

With the Sixers needing 42 off 30, Perry hit a beautiful six over cover and a slog sweep for four to ensure her team would cruise to victory.

With eleven balls to go, the Sixers needed seven to win, and Perry was on 98 not out. Van Niekerk was on strike, though, and clearly didn’t get the memo as she smashed a boundary to bring Perry’s hundred into question.

The Scorchers will rue their poor fielding, particularly Kate Cross, who made three errors that cost her team boundaries. 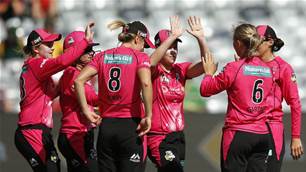