This match-up looks incredibly even on paper, with both teams relying on a healthy contribution from their entire team rather than one or two superstars.

Last time they met, Beth Mooney hit 102 off 55 balls to steer her team to victory, but the Thunder won’t be too disappointed given that they were highly competitive in a game where one player changed the landscape of the match.

Middle-order batter Naomi Stalenberg confirmed that the Thunder will stick to their guns in the semi-final.

“I don’t think we’ll change too much,” Stalenberg said.

“In terms of the bat we’re all hitting the ball really well. It was a really exciting game up in Cairns and I don’t think we can change too much from that.

“Sydney Thunder have a lot of experience, especially internationally, and everyone’s contributed in a really good way, so we’re all really excited."

The Thunder will rely on openers Rachael Haynes and Rachel Priest to get them off to a strong start. Their plan so far this season has been for Priest to attack the new ball, and for Haynes to bat deep into the innings, and that will continue in the semi-final.

With Alex Blackwell coming into form in the latter stages of the competition, all of the Thunder middle-order batters have contributed this season, and this is an area that they look to have a slight advantage over the Heat.

Even in the lower middle-order, Stefanie Taylor and Nicola Carey are averaging 39 and 42.5 respectively as late order finishers.

Indian superstar Harmanpreet Kaur has been well below her best in the latter stages of this tournament, but she’s got plenty of big match experience and could be a difference maker in the finals.

With the ball, it’s variety that is the key for the Thunder. They might not have the biggest names, but their attack boasts two off-spinners, two leg spinners and an array of quicks that all fill their role slightly differently. 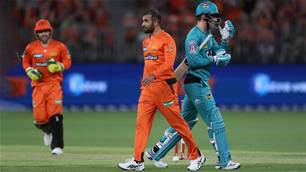 BBL Round-Up: Sixers and Canes light up Sunday while Heat enjoy the rain in Sydney