As fans eagerly awaited to watch Orlando Pride take on the Portland Thorns, there was one young fan who couldn't wait to meet his hero.

Joseph is one of the Pride's youngest but biggest fans.

The two-year-old along with his dad came face to face with his idol Pride defender Carson Pickett because the pair have something in common.

Joseph, just like Brisbane Roar-loanee Pickett, was born without a left forearm and hand.

"He kind of sees those who look like him and I think he relates to them," Joseph's father said.

He wants his son to see and look at Carson in person so Joseph knows that he can succeed at anything, even sports.

You may need some tissues while watching this story.

A bit shy and timid meeting his hero, Pickett slowly wins over the youngster with her friendly and outgoing personality.

"You see so many people that you idolise and they have two hands and two feet but to see someone just like you," Pickett said.

April is Limb Difference Awareness month and is a time to educate and celebrate, sharing the realities of living with limb difference and limb loss. 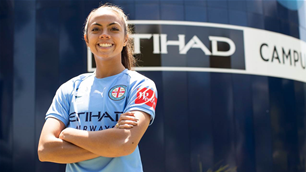 'I love to hit the scoreboard': Even stronger City add deadly US striker