There has been just one change in the Australian women's cricket national contract for the 2019-20 season.

Georgia Wareham has been awarded a national contract after her performances over the past 12 months.

It's been a rapid rise to the national team for the 19-year-old, having made her ODI and T20 debut in September and October 2018 respectively.

During the last game of the Rose Bowl ODI series, Wareham picked up two wickets in consecutive balls to break a strong opening stand from New Zealand and helped Australia to a clean sweep.

“Overall there has been minimal change in the CA Contract list, which we believe is a good sign leading into a very important year with the Ashes and a home T20 World Cup," National Selector Shawn Flegler said.

“Georgia Wareham was upgraded onto the list during the season and has been rewarded with her first full contract.

“Amanda-Jade Wellington misses out on a contract after losing her spot in the side earlier in the season. Amanda-Jade is aware of what she needs to improve to put herself back in contention for selection and her first opportunity is through the NPS Program."

The team had an outstanding summer, winning Twenty20 and One-Day International series against New Zealand and Pakistan, as well as claiming the ICC Women’s T20 World Cup in the West Indies.

The 2019-20 season includes a Women's Ashes campaign in England and culminates with the ICC Women’s T20 World Cup, being hosted in Australia. 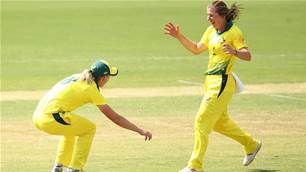