Kyra Cooney Cross is set to become one of the W-League's biggest stars next season with one eye set on the 2023 World Cup.

After bursting onto the scenes last season in Western Sydney Wanderers resurgent push towards the finals, Cooney-Cross became the starlet to watch across Aussie football.

Now she has a major prize on the horizon with Australia joint-hosting the 2023 World Cup, and she'll have the perfect platform to show her skills in a W-League missing most of the current Matildas contingent.

Her pathway towards the national team is also clear, with the Wanderers midfielder praising the work of Leah Blayney and the coaching team at development hub Future Matildas.

“It's been a good start for us the last couple of weeks,” said Cooney-Cross.

“Leah [Blayney] and Steve have done really well in starting us off right. I think the squad is good.

"I'm just getting used to playing and training with each other again and the intensity has been really great in the sessions.”

Cooney Cross has relied on fellow Wanderers teammate and Young Matildas star Courtney Nevin to push her throughout the off-season and now she partners the other prodigious talent in the Future Matildas set up.

“She's one of my best friends and I've been living with her and her family for nearly a year now,” Cooney-Cross stated.

“Having her around during COVID was good because you can push each other to train. We’re lucky to have each other during this period.”

Cooney Cross says that while the World Cup is her clear goal, there is still a lot of time - and a lot to improve - to make it happen.

With the current Matildas veterans all setting their sights on the same goal, the competition is set to be greater than ever.

“I think I need to improve my work rate; it can always be better,” she said. “There’s so much to improve because I’m still such a young player.

Training hard every day, planning to work hard [is important]. You also need to have a good mentality; I think that is something us as young players can get better at."

“I still have a few years to get there, but I'm still young.” 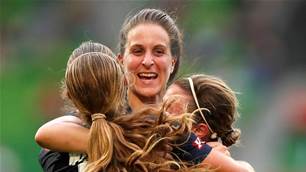