VPLW club Geelong Galaxy United epitomise the struggle some clubs are having when filling women’s teams in 2021.

As part of the requirement to play VPLW the club needs to field a Reserves team but have struggled to make up numbers. FV won’t give them an exemption from fielding a Reserves team, meaning the club has to fulfill that arrangement or risk not being compliant with licensing requirements.

In what is a remarkable, but likely unsustainable arrangement, the club’s Senior team have offered to play both Reserves and Seniors.

In a statement on the Galaxy United Senior Preseason Facebook page, confirmed by the club, the players pledged to help their club meet the requirements of FV by playing two games a day for the rest of the season.

“Galaxy’s senior women’s players have made the very brave decision to play both Senior and Reserve grade fixtures for the entire 2021 VPLW Season.

“The senior program has made the courageous decision to save the pathway for the future generations of girls and woman across the region who may, like the current players, want to challenge themselves or have dreams of a life in the sport.

“On Saturday the women will begin a very tough journey. A year of physically tough, mentally tough and emotionally tough challenges.

A number of football people in Geelong have expressed concern with this new arrangement, with player welfare the paramount concern.

“The demands of such an elite competition, leaves young woman players vulnerable to injury at the best of times let alone from playing two games a day,” said a parent who asked not to be named.

“It is ridiculous that a club has to do this due to FV not being flexible. Surely a number of clubs can’t field Reserves this season and surely we can use common sense, post Covid, to exercise a bit of discretion.

“If we burn players out this year we risk losing them next season, and their goes the senior program too.”

Galaxy have tried a number of measures to get a team up and running, including offering player scholarships as well as linking with local women’s teams to field a Reserves team. It has all proved fruitless.

Galaxy have long struggled to attract players with local community clubs reluctant for their players to leave and go to the higher pathway. The cost of playing at that level has also proven to be challenging.

In 2021, Geelong as a region is struggling in its girls and women participation numbers, with many local clubs fielding significantly less teams.

“Geelong’s Senior team registration is down around 50% from pre-Covid19 times.”

Galaxy and the Geelong region are not alone in their struggles, with a number of clubs in Victoria across the NPLW, VPLW, State League and community competitions, struggling for players at senior and junior level.

If any player is interested in playing for Galaxy, they can contact Senior Coach Rob Casha on 0419 417 598. 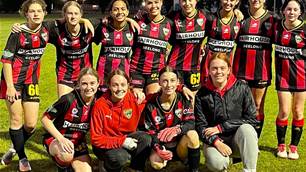