After a prolific year at Chelsea, Matildas superstar Sam Kerr has been nominated for yet another award.

Australia’s greatest football export has been nominated for another award, the Professional Footballers’ Association WSL Fans’ Player of the Year award.

Unlike the other FA Women’s Super League PFA awards, this one allows for fans to vote for their favourite player.

You can vote for Kerr using the following link: 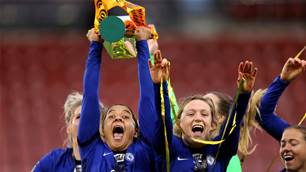