Casey Dumont has overcome breathing difficulties, a nasty bang to the ribs and an onslaught from Sydney FC to seal a 2-1 A-League Women grand final win for Melbourne Victory.

The Victory goalkeeper single handedly kept her side in the contest as Jeff Hopkins' outfit were overwhelmed by Sydney for large parts of Sunday's decider.

In front of 5027 fans at Kogarah Oval, Dumont, who spent much of the week in the build-up to the final battling illness, kept Sydney's front three of Remy Siemsen, Princess Ibini and Cortnee Vine at bay.

Casey Dumont does it again! 🔥

Catch all the action LIVE on @Channel10AU (BOLD) 📺

Second-half goals from Amy Jackson and Catherine Zimmerman gave Victory the edge but it was the heroics of Dumont at the other end which helped secure Hopkins' record fourth title.

"That's what we pay her the big bucks for," Hopkins said of his goalkeeper.

"She's been in fantastic form and has got better as the season's gone.

"When the chips are down and in the big games she performs. Against adversity, she got smashed in the second half (at a corner) and I wasn't worried because I knew she'd get up."

The win means Victory are just the second team to win back-to-back grand finals in the history of the competition.

The sole blemish for the Victory No.1, who was named player of the match, was allowing Vine to claw a scrappy one back for Sydney in the 66th minute at a corner.

Dumont, who missed last year's decider with injury, received medical attention towards the end of the first half and was seen sitting on the floor of the Victory change rooms during the halftime break. The 30-year-old spent parts of this week bed-bound with illness, but she got back out there to help Victory to their fourth A-League Women championship.

"I've not been well this week and they've been monitoring me throughout the week," she said.

"During the game I came over light-headed and I was trying to get my blood pressure up and sugars up to get back out for the second half."

It was a case of deja vu for Sydney. Like last year they finished top of the pile in the regular season, had a mountain of possession but were pipped at home by Victory in the game that mattered most.

Their front three of Vine, Siemsen and Ibini struggled for fluency and despite making the last five grand finals they have just one championship under Ante Juric.

"Football gods, maybe," Juric said when asked about his side's bad day at the office.

"It's heartbreaking. The girls are devastated.

"I've always said this for a long time: if you put everything into something and you lose, that's still winning.

"I've always told them and I believe that in my heart. Sometimes the scoreline doesn't reflect what actually happened." 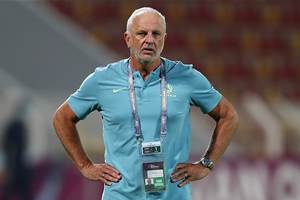 'He's in a very difficult position': FA support for Arnold melting away

After receiving the backing of Football Australia on the eve of the Socceroos' soul-crushing World Cup loss to Japan, an abrupt shift in sentiment has left coach Graham Arnold hanging on by his finger nails. 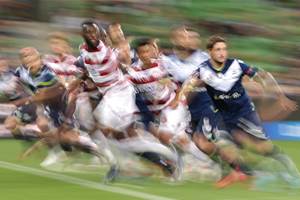